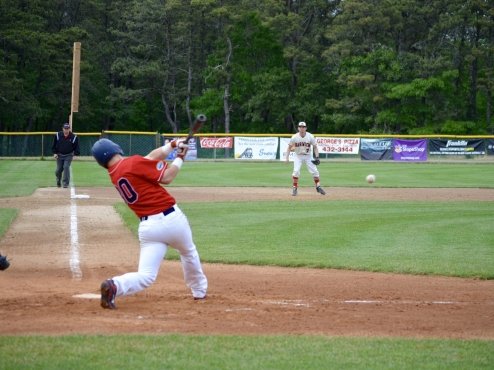 HARWICH, Mass. ? Despite dominant pitching from both sides throughout most of the game, the Yarmouth-Dennis Red Sox (23-13) edged the Harwich Mariners (21-13-2) by a score of 3-0 on Sunday night. The game remained scoreless until the seventh inning when the Red Sox finally pushed the first run of the game across the plate. Brendan Skidmore (Binghamton) led the Red Sox offense with three hits and drove in a run, and Kevin Smith (Maryland) added a hit while playing outstanding defense in the field.

Oliver Jaskie (Michigan, 2-0) got the start for the Red Sox and threw 5.2 shutout innings while tallying seven strikeouts and allowing just three hits. He looked excellent, as he kept Harwich hitters off-balance by varying usage tendencies with his pitches and showing brilliant command. He also featured sharp downward movement on his changeup that left Mariners swinging helplessly over the pitch.

Jaskie also extended his scoreless inning streak to 20.1 innings of work, as he allowed his last earned run on July 2nd against the Falmouth Commodores. This is also the only earned run he has allowed this season.

Austin Bain (Louisiana State, 2-1) kept the Red Sox off the board over the first four innings on Sunday evening in his first start of the season for the Mariners. A few long at-bats in the middle of his outing, including one by JJ Muno (California Santa Barbara), drove up his pitch count and resulted in his early exit from the game.

Skidmore helped get the Red Sox offense going in the top of the seventh, notching his second single of the game to lead off the inning. Tyler Houston (Butler) followed with a line drive to right field, and a poor route to the ball by Antoine Duplantis (Louisiana State) allowed Houston to slide into third with a triple, scoring Skidmore. The Red Sox extended their lead to 2-0 after Corey Dempster (Southern California) laced a single into left field, bringing home Houston.

Y-D added another run in the bottom of the eighth, as an error and walk gave Y-D runners on first and second with no outs. Will Toffey (Vanderbilt) moved the runners over with a sacrifice bunt and Harwich intentionally walked Smith to load the bases. Skidmore poked yet another single to center field, scoring Muno from third and pushing the lead to 3-0.

Calvin Faucher (California Irvine) slammed the door on the Mariners in the last two innings, tallying his second save of the season. Nathan Kuchta (San Diego) earned the win with 1.1 innings of relief and Brad Bass (Notre Dame) was tagged with the loss for Harwich.

With the victory on Sunday night, the Red Sox reclaim sole possession of first place in the East division and clinch a spot in the postseason. Y-D will be back in action on Tuesday night, taking on the Chatham Anglers at Red Wilson Field. First pitch is at 5 p.m.