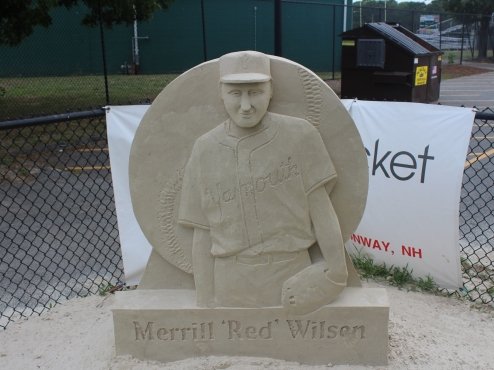 SOUTH YARMOUTH, Mass. ? The Yarmouth-Dennis Red Sox will host a celebration in remembrance of the late Merrill ?Red? Wilson and his wife, Florence, who predeceased him in 2015, at 4:30 p.m. on Friday, July 29, prior to the team?s home game against the Brewster Whitecaps.

The pre-game presentation will include a special reflection and two ceremonial first pitches, while several memories of Red and? Florence will be shared during the game. In addition, the first 100 kids to enter the ballpark will be given a ticket redeemable for a free hot dog.

Fans are encouraged to wear red to the game in honor of Wilson as well as in conjunction with Red Shirt Friday, organized to show support for our servicemen and servicewomen.

Wilson, who passed away on April 13 at age 87, spent nearly three decades serving the Cape Cod Baseball League as a player and coach. In those capacities, he held associations with the Yarmouth Indians and their successors, the Y-D Red Sox, from 1957 to 1986. In addition, he was a longtime coach and administrator at Dennis-Yarmouth Regional High School.

An All-Star as a catcher for the Indians in the Lower Cape Cod League, Wilson was named league MVP in 1961. He later served as manager of the Indians and Red Sox, guiding the latter to a runner-up finish in the 1973 Cape Cod Baseball League Championship.

Perhaps one of the biggest honors bestowed upon Wilson came in May of 1981, when the baseball field at D-Y High School, used by the school?s baseball team and the Red Sox, was renamed in his honor.

In 2008, Wilson was named an Honorary Captain for Y-D when the Red Sox faced Falmouth in the City of Champions Hall of Fame Classic at Campanelli Stadium in Brockton, Massachusetts.