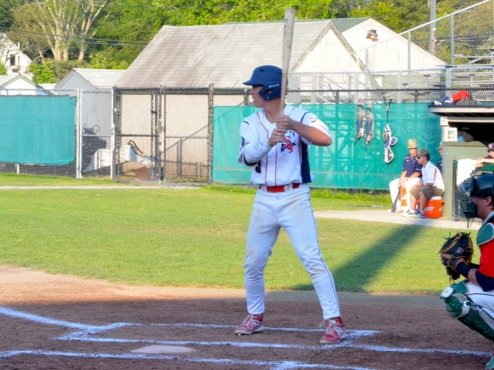 WAREHAM, Mass. ? The Yarmouth-Dennis Red Sox fell to the Wareham Gatemen, 13-9 Friday night at Spillane Field. The game was cut short in the eighth inning due to inclement weather.

JJ Muno (UC Santa Barbra) tallied two hits in the ballgame, bringing his average to a team leading .328 on the season. With Deon Stafford?s (Saint Joseph?s) two-RBI performance, he brings his total to 20 on the summer campaign. Dillon Persinger (Cal State Fullerton) continues to swing a red hot bat for the Red Sox.

Robert Metz (George Washington) was a thorn in the side of Y-D, recording four hits including a home run early in the ballgame.

What seemed to be killer for Y-D in the contest is that every time the Red Sox would cross the plate, Wareham would have an answer.

Will Toffey (Vanderbilt) got it started for the Red Sox in the top of the first inning, poking a two out solo home run. However, the Gatemen answered in the bottom half and pushed across three runs of their own giving them a 3-1 lead. A Gavin Sheets (Wake Forest) two RBI liner off the wall scoring Joey Bartosic (George Washington) and Metz, sparked the inning.

Wareham struck again in the second after Ezequiel Sanchez (Massachusetts) reached on a single and Metz smoked a two-run blast. The Gatemen would score again another inning later, leading at a comfy 6-1.

In the fourth, Stafford (Saint Joseph?s) got aboard after being hit by a pitch, and with great hustle, advanced to third on a wild pickoff attempt. With a Persinger fielder?s choice, Stafford was able to cross the dish.

Y-D picked up where they left off and scored three more in top half of the fifth. A two-RBI double stroked by Stafford scored Muno and Toffey. Connor Wanhanen (TCU), who pinch ran for Stafford, was knocked home by a Persinger RBI double, closing the deficit to one. However, Wareham responded with four more runs of their own giving themselves a five run cushion.

Wareham responded again in the sixth after Colton Shaver (Brigham Young) showed off his power ripping a solo blast over the left-center field fence into the bleachers.

YD was able to push three more across in the seventh off of an error in the outfield, and a fourth from a Houston RBI single. However, Wareham responded, giving themselves a 13-9 lead.

Erich Uelmen (Cal Poly, 2-1) was on the hill for Y-D, and tossed 3.1 innings with five strikeouts, one walk with four earned runs. He was credited with the loss.

Brett Conine (Cal State Fullerton, 1-1) got the start for Wareham and picked up his first win.

With the loss, Y-D slides to 22-13 on the summer campaign. The Red Sox hope to regain momentum on Sunday against Harwich.