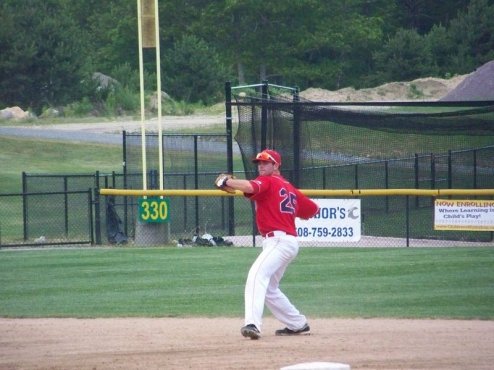 Andrew Daniel went 2 for 4 with 2 runs scored and an RBI in his team?s 9-1 victory over Bourne Monday. PHOTO: Katie Carlson/Y-D Red Sox

The Yarmouth-Dennis Red Sox (4-7) traveled to Doran Park to take on the Bourne Braves (5-6) Monday. The Sox took an early lead, which held until the final out giving them the 9-1 win over the Braves.

Starting on the mound for the Braves was Kris Garner (L, 0-2) who pitched 5.0 innings, allowed eight hits, six runs (five earned), walked two batters and recorded one strikeout. He started the game strong appearing to shut down the Sox getting the first two batters out. Then, Robert Pehl doubled starting a two out rally that ended up giving the Sox a 5-0 lead at the end of the first.

Erick Fedde (W, 2-0) took the mound for the Red Sox. The ace pitched 7.0 innings allowing five hits, one earned run, and striking out five. Fedde is standing out on the Red Sox pitching staff with an earned run average of .91 in 19.2 innings pitched. In his three starts he has struck out 18 batters and only allowed 11 hits. This is also Fedde?s second win against the Braves.

Standing out for the Sox were Pehl, Stewart and Taylor Gushue. Pehl batted two for three, walking twice and scoring twice. Pehl?s batting average improved to .341 on the season and recorded his third double on the year.

Stewart extended his hitting streak to six games and has had a hit in each game he has played for the Sox this season. The outfielder went two for four, scored once and recorded one RBI. His batting average improves to .381 on the season.

Gushue doubled twice in the game and went two for five. The catcher recorded two RBIs in the game as well. His batting average improves to .222 on the season.

This game marked a turnaround for coach Scott Pickler?s squad, who has lost three straight and is currently fourth in Eastern Division standings with eight points in the division. The Red Sox return home tomorrow at 5 p.m. EST to take on the Chatham Anglers (7-4). The Anglers were ranked tenth nationally in a recent Perfect Game Summer Collegiate Team Rankings on Monday. Check our Facebook and Twitter pages for live updates and as always, our own live broadcast starting just before first pitch.