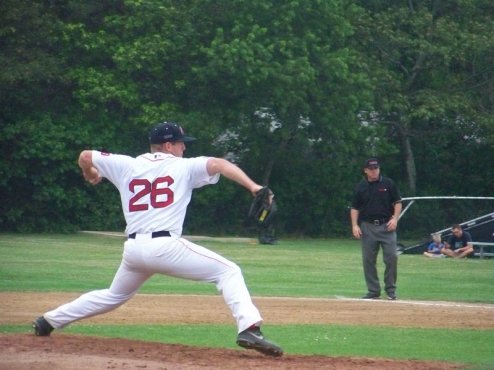 Kyle Wood made his first start in a Red Sox uniform tonight and picked up his first win of the summer throwing 5.2 innings of one run ball against the Orleans Firebirds. Wood allowed four hits, walked two and struck out two.

The Red Sox scored runs in each of the first four innings with three in the first, two in the second, two in the third, and one in the fourth. Andrew Daniel went 2-4 with two singles, a run scored, and an RBI. Daniel now has a nine-game hitting streak to start the summer.

The Firebirds were held to just one run at the arms of Kyle Wood, Kody Kerski, Jordan Minch, and Jose Lopez. Kerski, Minch, and Lopez threw 3.1 scoreless innings of relief out of the pen.

Colin Slaybaugh and Jordan Betts accounted for four out the Firebirds seven hits, both going 2-4 on the night.

The Red Sox moved to 5-7-1 on the summer as the Firebirds dropped to 6-7 with the loss. The Red Sox are back in action tomorrow night as they travel to Chatham to take on the Anglers. First pitch is set for 7pm.