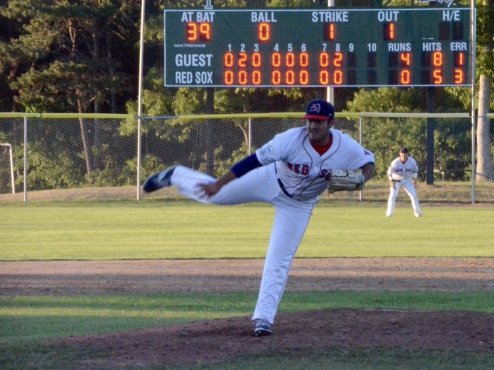 SOUTH YARMOUTH, Mass. ? The Yarmouth-Dennis Red Sox dropped Wednesday night?s matchup against the Chatham Anglers by a score of 5-0. Tony Dibrell (Kennesaw State) shut down the Red Sox over six innings, holding Y-D to only three hits and tallying seven strikeouts. Dibrell (2-0) recorded the win for the Anglers, while William Montgomerie (0-1) took the loss. Matt Whatley (Oral Roberts) reached base twice and has now reached safely in nine straight games.

Montgomerie, coming off of his sophomore season at the University of Connecticut, pitched well in his first outing against Brewster. He allowed only two runs across five innings, and struck out six. The two runs he allowed came on a home run in his last inning of work and he looked sharp outside of this hiccup in his outing.

The Anglers pushed across the first runs of the game in the top of the second. After Sean Bouchard (UCLA) walked and Kyle Adams (Richmond) singled to left, Montgomerie got a double play that seemingly neutralized the threat. But, Joseph Freiday (Virginia Tech) hit an opposite field home run over the right field fence to give Chatham an early 2-0 lead. After two more walks and a single, Sam Delaplane (Eastern Michigan) relieved Montgomerie and the Red Sox escaped without allowing any more damage.

While the offense was held in check for most of the game, Y-D threatened in the bottom of the first. Matt Winaker (Stanford) reached on an infield single to shortstop and Whatley followed with a walk. Mikey Diekroeger (Stanford) then singled between first and second and the Red Sox had the bases loaded with one out. But, Dibrell was able to get a pop out and a strike out to end the inning and Chatham remained ahead.

Dibrell was able to keep Y-D hitters off balance throughout the game, mixing a blistering fastball with a sharp curve. His curveball has earned high marks from scouts, and he was able to use it to get both swinging strikes as well as freeze hitters with it.

Montgomerie lasted just 1.2 innings and allowed two earned runs. He struggled with his control from the start, and Y-D manager Scott Pickler made the decision to pull him in the second inning.

Walks were ultimately the downfall for Red Sox pitching, as they combined for nine free passes. Chatham wasn?t able to capitalize on having runners on base, however, stranding 16 runners.

The Red Sox will look to bounce back tomorrow night when they take on the Orleans Firebirds at Eldredge Park in Orleans. First pitch is at 7 p.m.