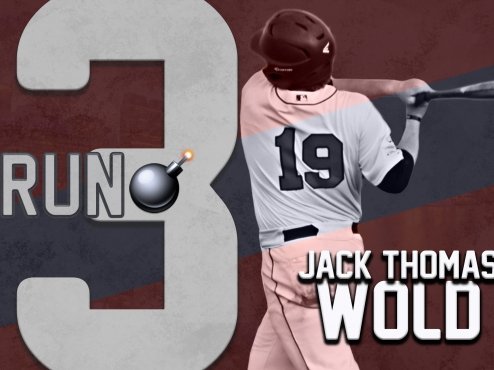 SOUTH YARMOUTH ? A late surge and some clutch hitting handed the Red Sox their second win in a row. They defeated the Harwich Mariners 5-4, and have now improved their record to 17-11-2.

For the second day in a row, the Red Sox jumped out to an early lead in the first inning. Both Brad Beesley (Cal Poly) and Austin Wells (Arizona) got on with base hits, setting Noah Campbell (South Carolina) up with a runner in scoring position. He came through with a RBI on a bloop single to centerfield, giving Y-D a 1-0 advantage.

John Beller (USC) got the start for the Sox and cruised through the first two innings. He walked two batters in the third, but was able to get two outs; putting himself in good position to make it out of the inning scoreless. With the bases loaded, Joey Wiemer Jr. (Cincinnati) battled against Beller and eventually won with a base hit. Two runs crossed the plate, giving the Mariners a 2-1 lead through three innings of play.

Beller ended up going four innings and gave up two runs on four hits, struck out three, and walked three. Cullen Kafka (Oregon) took over on the mound in the fifth, and with two outs Wiemer Jr. once again came through for the Mariners. A single drove in the third Harwich run of the day, putting them ahead 3-1.

Kafka was still on the mound in the seventh, when Wiemer Jr. drove in his fourth and final run of the game on his third single. Aside from giving up the two runs, Kafka struck out four batters and didn?t walk any.

Oscar Carvajal (Fresno State) got the eighth and sat the Mariners down 1-2-3, including a strikeout. With the Red Sox running out of outs, Campbell led the home half of the inning off with a base hit. Riley King (Georgia) kept it going with a single of his own, before Tate Samuelson drove in Campbell and made the score 4-2. Just like that, the go-ahead run was at the plate and coach Pickler elected to put Jack-Thomas Wold (UNLV) up to pinch hit. On the very first pitch he saw, he blasted a clutch three-run dinger over the fence in right field. It was a huge spot and no one was more equipped to come up big than Wold.

Taylor Dollard (Cal Poly) shut Harwich down in the ninth without allowing a baserunner and striking out two.

With the 5-4 win, the Red Sox now have some momentum going forward as they have won two straight after a deflating 15-3 loss. King had a base hit on four at bats in this game, making him officially eligible to qualify for the batting title. He?s sitting in second place with a .359 average, joining teammates Wyatt Young (Pepperdine) and Austin Wells inside the top nine.

The Red Sox will host the Bourne Braves at 5:00 P.M. at Red Wilson Field on Tuesday night for part one of a home-and-home.