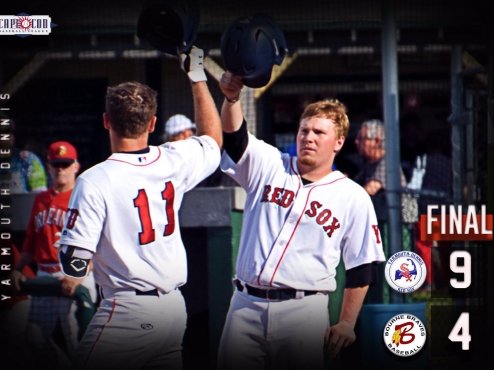 Y-D?s starting lineup did not feature two of the team?s best hitters in Young or Austin Wells (Arizona) ? who took a foul ball off his foot behind the plate two nights ago. Other Red Sox players picked up the slack. Hall, who has only gotten 25 at-bats in 20 games, had himself a night. The utility player went 3-5 with three runs in the leadoff spot.

Beesley, who has been one of the lineup?s most productive hitters since moving into the two slot, went 3-4 with three runs, a walk, and an RBI to up his batting average to .270. He scored the game-tying run and drove in the run that gave Y-D the lead. In the past week, Beesley has recorded eight hits, five walks, and three RBIs. Even when he?s not getting on base, he?s making productive outs by getting runners into scoring position.

?I started at leadoff and I struggled and dropped down, started getting hot and moved back up ? that?s just baseball,? Beesley said. ?Just sticking with it every day and making slight adjustments is all you have to do. It definitely feels good to be able to perform for my guys.?

The offense has also benefitted from moving Campbell ? who hit in the two slot ? into the cleanup spot. Campbell has recorded at least one RBI in the last three games and is hitting just below .300. He went 2-5 with a run and two RBIs last night. Tate Samuelson (Cal Poly San Luis Obispo) went 1-3 with two RBIs and a walk, and Jack Thomas-Wold (UNLV) smacked a two-run home run one day after his three-run bomb gave Y-D the victory over the Harwich Mariners. Young went 2-2 with a run, R.J. Yeager (Mercer) went 1-2, and Noah Cardenas (UCLA) went 1-3 with a run and a walk.

The Red Sox wasted no time, as three straight singles by Hall, Beesley, and Samuelson got Y-D on the board in the bottom of the first inning. The second run came courtesy of a fielder?s choice by Campbell. The Braves took advantage of a sloppy inning by the Y-D pitching staff and defense in the top of the second to cut the deficit in half.

Bourne scored two runs on one hit in the top of the sixth inning, but Y-D answered with one run on one hit and one error in the bottom half of the inning. The Red Sox offense exploded for six runs on seven hits and two errors in the bottom of the seventh. Young began the inning with a single, followed by base knocks by Cardenas, Hall, and Beesley. A Samuelson sac fly scored the third run of the inning, before Campbell smacked an RBI single into center and advanced to third on an error. Jake Palmer (UC Irvine) worked a phenomenal 12-pitch walk, followed by Young?s second single of the inning, but the Bourne defense managed to get out of the inning after that.

Y-D gave up one run in the top of the eighth inning but held on to secure the 9-4 victory. Leftwich struck out four and gave up two hits, one run, and one walk in five innings of work. Walter struck out five and gave up one hit, two runs, and one walk in two innings pitched, and Winger gave up two hits and one run in the last inning of the game. The game was called after the bottom of the eighth inning due to darkness.

The Red Sox are still two points behind the first-place Chatham Anglers but have gained a five-point lead over the third-place Orleans Firebirds. They will travel to Doran Park tonight to take on the Bourne Braves for the second time in as many days. First pitch is set for 5 p.m.