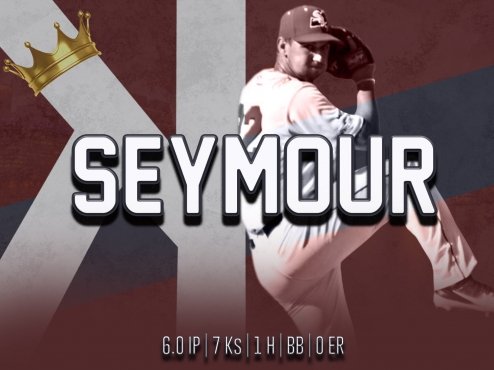 SOUTH YARMOUTH ? The Yarmouth-Dennis Red Sox bounced back from a crushing 15-3 loss to the Orleans Firebirds with a 7-0 win against the Falmouth Commodores last night. In his last start of the summer, Ian Seymour (Virginia Tech) threw six scoreless innings with seven strikeouts. Seven different batters in the Y-D lineup recorded at least one hit.

After a 3-4 performance at the plate that included a home run, two runs, and one RBI, Riley King (Georgia) is now tied with Wyatt Young (Pepperdine) for the highest batting average on the team at .365. He needs just three more at-bats to qualify for the league?s batting title. As of now, Young is second in the running behind Zach DeLoach (Texas A&M) of Falmouth, who is hitting .395. Young went 1-3 with a double, a walk, and two RBIs last night against the Commodores. Noah Campbell (South Carolina), Tate Samuelson (Cal Poly San Luis Obispo), Jake Palmer (UC Irvine), and Andrew Eyster (South Carolina) each had a hit apiece, and R.J. Yeager (Mercer) went 2-4 with two runs.

Yeager, who struggled to adjust to Cape League pitching during the first half of the season, is really starting to come into his own. He credited his improvements at the plate to the feedback he?s received from coaches and other players and the number of games the Red Sox have played without a day off.

?Lately I?ve been seeing [the ball] a whole lot better than I had in the beginning,? Yeager said. ?I work on it every single day, and playing consistently has helped a lot. I didn?t realize some of the [holes] I had in my swing. [With] this pitching and competition, it really stands out. You have to critique your swing and perfect it every day to hit these pitchers up here.?

Seymour pitched another gem in his last start of the summer for the Red Sox. He gave up just one hit and one walk in six innings of work, finishing the season with a 2.49 ERA and a league-best 39 strikeouts in 25.1 innings pitched. He surely would have been named an All-Star had he not reached his pitch count for the summer. As he left the Red Wilson mound for the final time, he was embraced by teammates. However, the team member who is the saddest to see Seymour go is Brady MacNeil, the team?s batboy and biggest fan. Like many of the other Y-D players, Seymour has formed a special relationship with Brady over the last several weeks and is one of Brady?s favorite players.

The Red Sox will have a major hole to fill without Seymour in the bullpen, but Red Sox Manager Scott Pickler saw some good signs last night. Carlos Lomeli (St. Mary?s) ? who hasn?t pitched since he hurt his finger at Chatham on July 1 ? gave up just one hit and struck out three batters in 1.2 innings of work. Jacob Winger (High Point) retired every batter he faced in the final 1.1 innings of the game. The Y-D pitching staff sat down DeLoach, the league?s best hitter ? he went 0-4 with three strikeouts.

Going into the bottom of the fourth inning, Falmouth starter Carlos Gonzalez (Stetson) had a pitch count in the 20s. Neither team got on the board until the bottom of the fifth inning, when the Red Sox tacked on two runs on two hits. Eyster walked, Yeager singled into right field, and Young doubled into the right-center gap.

Y-D exploded for four runs on four hits and two errors in the bottom of the seventh inning. King, Palmer, Eyster, and Yeager all singled to make it a 4-0 game. Young walked to load the bases for Brad Beesley (Cal Poly San Luis Obispo), who drew an RBI walk. Campbell made it a 6-0 game with a sac fly to center field. In the bottom of the eighth inning, King smacked his third home run in four days to make it a 7-0 game.

The 16-11-2 Red Sox are still two points behind the first-place Chatham Anglers and will play the last-place Harwich Mariners tonight at Red Wilson Field. First pitch is set for 5 p.m.