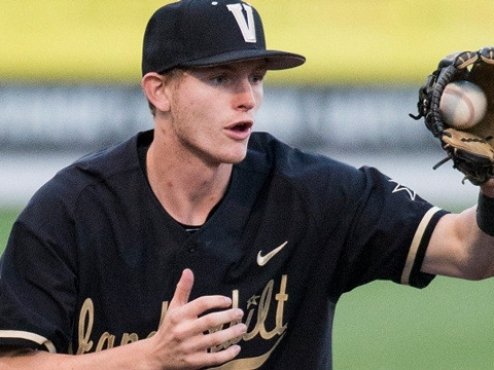 SOUTH YARMOUTH ? Growing up in Barnstable Village, the Cape Cod Baseball League has always been a part of Will Toffey?s summers.

?I was just like every other little kid around here, playing Wiffleball behind the outfield fences, running around catching foul balls,? Toffey said.

The big difference between the freshman Vanderbilt third baseman and those other kids playing around the field is that Toffey now gets to play on the field too. Toffey made his Cape League debut Wednesday for the Yarmouth-Dennis Red Sox. And, much like the start of his collegiate career for the Commodores, he is joining the reigning league champions.

But does Toffey feel the pressure of playing so close to home where he has a Paul Bunyan-sized folk lore growing around him?

?I?m just looking to have some fun here in the Cape League. I want to really just experience this league for what it is.?

And why shouldn?t he have some fun?

Unlike the majority of Cape Leaguers, Toffey has the comfort of falling asleep in his very own bed. Mornings begin with a homemade breakfast from his parents. He picks out clothes from his own dresser, or perhaps his hamper, as opposed to a suitcase. The commute to the ball field is second nature. The 10-minute drive Dennis-Yarmouth Regional High School was regularly made when his family would take him to games as a boy.

And if there happens to be traffic on the way to Red Wilson field due to pesky tourists ? no sweat ? he knows all the back roads.

The point is this: Toffey is at ease here on the Cape because Cape Cod is the place he calls home.

?Being home is such a natural feeling. I feel relaxed. It?s just very comforting being here.?

His relaxation couldn?t have been more evident than in his first game against the Chatham Anglers, where he went 0-for-1 with three walks displaying an unnerved patience that most 19-year-olds lack in their debut in the acclaimed summer league.

In the top of the sixth inning with runners on first and second and no outs clinging to a one-run lead, Anglers shortstop Zack Short laid down a sacrifice bunt. Toffey cleanly bare-handed the ball and delivered a strike to first for the first out of inning while the runners advanced. The following batter hit a chopper to third and Toffey wisely threw home to catch the runner in pickle and not allowing the lead runner to score before recording the final out of the inning to thwart any chance of an Anglers comeback.

While the league has an aura surrounding it like the fifth-inning fog around Veteran?s Field in Chatham, Toffey has grown up in the thick of it. His brother, John, a two-sport athlete at UMass Amherst and playing in the Tampa Bay Lightning minor league system, spent the 2002 season as a relief pitcher for the Bourne Braves. Toffey served as the team?s bullpen catcher that season.

No longer relegated to playing Wiffleball beyond the outfield fence or warming pitchers up as the bullpen catcher, this is Toffey?s time to shine on the field.

?I?m real excited to get going. I?ve dreamed of playing in this league ever since I was little kid and now I get that opportunity. I?m just looking forward to this summer.?