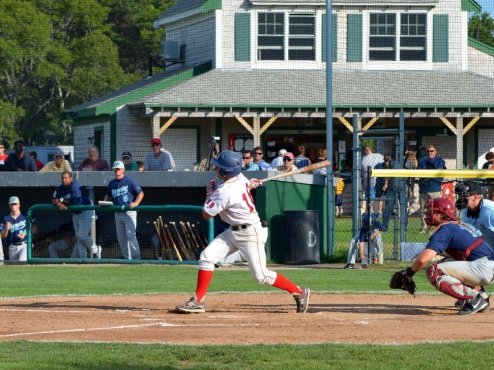 Most baseball players are happy when their batting average spikes after a good game or consistent week. Donnie Walton (Oklahoma State) is a whole other story.

Walton has seen his batting average increase from .179 to .281 since his stint with the Red Sox last summer. In 16 games for the Yarmouth-Dennis Red Sox last season, he batted .179, struck out 15 times, and committed five errors.

This season something changed. After an impressive junior year, Walton returned to Red Wilson Field this year with a new approach, attitude, and role. So far this season, Walton has exceeded all expectations and become the leader of the Red Sox?s infield.

?Last year I went through a long struggle and I think it was the best thing that ever happened to me. Going through that struggle and that slump definitely helped me become better from a mental standpoint. It made me a better player,? said Walton.

While his offensive improvements are staggering, his defensive abilities are what make him so important to the Red Sox. Among all of the shortstops in the league, Walton ranks first in games, total chances, and assists and second in putouts.

With five errors in 16 games last year, he averaged almost an error in every three appearances. This season he has played in 37 games and only committed nine errors. While that is only one shy of Tristan Grey of the Falmouth Commodores, who leads short stops with 10 errors, it is a significant improvement over last season.

Walton, one of the Red Sox?s two second-year players, has been the most consistent and important piece of the infield this season. The Red Sox defense is currently second in the Cape League and has impressed despite many mid-season position and lineup changes. ?It?s a lot of hard work and it helps when you?ve got a good pitching staff and good guys around you to keep working and get you better each day,? said Walton.

His biggest accomplishment so far this season was being named MVP of the Cape Cod Baseball League All-Star Game. He started the game at shortstop for the East Division and knocked in the only run of the game.

?I notice I?m a lot older now. I know last year I was one of the younger guys, experiencing it for the first time. Now I can tell the guys what?s going on. If they?re struggling, what they need to do and stuff like that. I?m just happy to be here for the second time and get a chance to meet new players.?

Many players, including Stephen Wrenn and Gio Brusa, returned to the Cape this season and played for a different team. When asked why he came back to the Sox, Walton said, ?Coach Pick has been here for 18 years. He knows what he?s doing and I give him all the thanks in the world for letting me come back and play for him. Just a great coaching staff, team, and organization.?