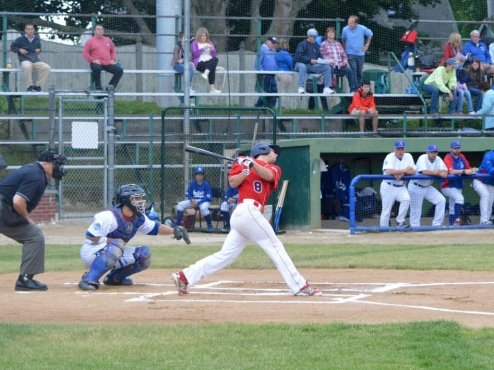 The Yarmouth-Dennis Red Sox (21-20) won a critical game on Thursday night by a score of 2-1 at Veterans Field against the Chatham Anglers (22-19). The incredible pitching performance from the Sox made up for their lack of offensive power.

Brandon Bailey (Gonzaga) started his seventh game of the season and lasted 5.1 innings, allowed six hits, and gave up one run. This was Bailey?s fourth straight notable start. In those four starts, he has gone 3-1 and allowed only four runs in 23 innings.

Ben Bowden (Vanderbilt) took the ball from Bailey and pitched 3.2 innings to finish the game. In his most impressive outing yet, he struck out seven batters and did not allow a single hit. His outing included an inning in which he struck out all three batters on only 10 pitches.

When asked about the new infield formation, Edman said, ?We?ve been playing really good defense pretty much throughout the year and the last couple games we?ve stepped it up. Even though there have been some rotations throughout the course of the summer, I think we?ve still been able to stay solid in the infield.?

The Red Sox only had seven hits and stranded 10 men on base through nine innings. Carroll went 2-for-4 and Gio Brusa (Pacific) had the only RBI of the game for the Sox.

Nathan Rodriguez (Arkansas) spoke about their inability to score runs and said, ?If we keep pitching like that we don?t have to worry about that. Bailey did awesome and so did Bowden. So as long as we score two runs and only allow one, we?ll be in pretty good shape.?

The Red Sox?s two runs came in the seventh inning despite the fact that Y-D never got a hit. Vidales was hit by a pitch and advanced all the way around the bases on passed balls and wild pitches. Edman walked and scored on Brusa?s sacrifice fly.

The Red Sox look to build on their two-game winning streak tomorrow at Red Wilson Field at 5 p.m. against the Brewster Whitecaps (23-17-1). The Sox are currently four points ahead of the Harwich Mariners (18-21-2) for fourth place in the East Division.