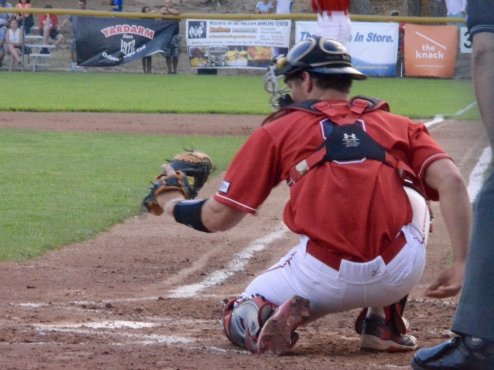 ORLEANS, Mass. ?? If an election was called for Mayor of Yarmouth after Saturday night?s game, Joey Thomas would have as good of a shot at winning as anyone.

With two outs in the eighth inning at Eldredge Park in Orleans, Thomas lined a 2-2 pitch from Will Stokes (Mississippi, 0-1) into center field, scoring Nolan Brown (Texas Christian) and breaking a 1-1 tie. The Red Sox held on to win, 2-1, and completed their sweep of the Orleans Firebirds in the first round of the playoffs.

The Firebirds raced out to an early lead, as a pair of two-out singles by Riley Mahan (Kentucky) and Riley Adams (San Diego) put runners on the corners in the bottom of the first inning. Garrett Benge (Oklahoma State) followed with a double to right field, scoring Mahan from third and giving Orleans a 1-0 lead.

The lead wouldn?t last for long, however, as one swing by Will Toffey (Vanderbilt) put the Red Sox on the board and evened the game at 1-1. Leading off the top of the second inning, Toffey sent a 2-2 pitch over the right field fence for a solo home run. He finished the regular season strong, batting .524 over the last seven days of the season, and has carried that momentum into the playoffs.

Pitching was dominant from both teams, as Y-D and Orleans combined for four hits from the third through the seventh inning. Three double plays over that time frame erased any runners that did reach and helped keep the game tied.

Jared Janczak (Texas Christian) got the start for Y-D and held the Firebirds to just one run over five innings of work while striking out four. He continued to pound the lower part of the strike zone with his heavy sinker and induce ground balls from hitters on Saturday night, as 68.75% of his balls in play were on the ground.

With two innings of scoreless relief, Dillon Bray (Western Carolina, 1-0) earned the win and Calvin Faucher (California Irvine) nailed down his second save of the postseason.

Joey Thomas (Cincinnati) has performed in clutch situations for the Red Sox after being added to the roster last week. He hit a two-out RBI single against Brewster in what ended as a one-run victory on Monday, and gave the Red Sox a late lead with a bases-clearing double against Cotuit on Tuesday.

During his time at Cincinnati, Thomas has seen sporadic playing time but both his hitting and defense have earned him a starting role for manager Scott Pickler?s team in the playoffs. He has posted a .384 batting average in four games for Y-D and driven in six runs.