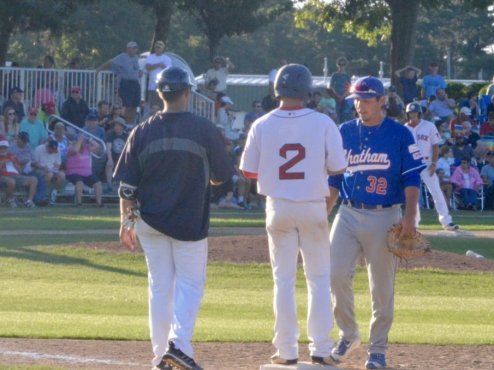 SOUTH YARMOUTH, Mass. ? Nolan Brown (TCU) proved to be an essential asset for Yarmouth-Dennis on Monday evening at Red Wilson Field. The speedy center fielder went 3-for-3 at the plate with two RBI, as the Red Sox held on to beat the Chatham Anglers, 9-8. Brown?s two RBI came in the seventh with a bases-loaded single and gave the Red Sox some breathing room that they would eventually need in the ninth.

Bryan Sammons (Western Carolina) took the mound for Y-D and pitched four innings, with four walks and four strikeouts. Pat Vanderslice (Saint Joseph?s, 1-0) relieved Sammons of his duties in the fifth and was impressive. He fanned six and walked one in 4.2 innings of work. Vanderslice picked up his first win of the summer playoffs.

Caleb Gilbert (LSU) got the start for the Anglers, tossing four innings with four strikeouts. Michael Fitzgerald (Northeastern, 0-1) was credited with the loss.

The Red Sox controlled the game offensively, noting 14 hits. However, their four errors allowed the Anglers to stick around.

Chatham jumped to an early lead, posting two runs on the board in the first.

Masson Koppens (Northeastern) marked the first hit of the ballgame on an infield single, and advanced to third on a Gunner Troutwine (Wichita State) double smoked off the fence in center. Jeremy Vasquez (Florida) followed up with Chatham?s third hit of the inning, pushing Koppens across the dish. Troutwine tallied the second run of the frame on an error in the infield.

Back-to-back jacks in the third gave Y-D a one-run cushion.rnrn Brown ripped a liner into right to spark the inning, while the Dillon Persinger (Cal State Fullerton) two-run homer leveled the contest at two apiece. Kevin Smith (Maryland) crushed a no-doubter on the first pitch of his at-bat to put the Red Sox ahead.

However, the lead quickly disappeared, as Chatham responded with a run in the fourth and the fifth.

Y-D answered with two runs in the bottom half of the fifth inning. JJ Muno (UC Santa Barbara) led the frame off with a base knock and scored on a Smith sac fly to deep left field. Persinger reached first on a perfectly executed hit and run, and a Will Toffey (Vanderbilt) RBI single pushed him across the plate.

The Red Sox gave themselves some insurance with another run in the sixth. Deon Stafford Jr. (Saint Joseph?s) entered the game as a pinch-hitter, and reached on a free pass while coming around to score on a wild pitch. This was Stafford?s first appearance in the playoffs after sitting out four games battling a hand injury.

Brown?s two RBI single in the seventh and the Persinger run on a wild pitch in the eighth proved to be crucial.

It seemed as if it was going to be d?j? vu all over again after the last time Y-D hosted Chatham.

The game came down to the wire after Chatham clawed their way back. The Anglers came into the ninth trailing by five and closed the deficit to one. DJ Artis (Liberty) was up to bat, with the bases juiced with two down. On the fourth pitch of the at-bat, Calvin Faucher (UC Irvine) had Artis roll over and ground out to Smith at shortstop, just barely creeping out of the inning. Faucher received his second save of the playoffs.

With the win, Y-D takes a 1-0 lead in the series and hopes to complete the sweep tomorrow night at Veterans Field. First pitch is at 7 p.m.