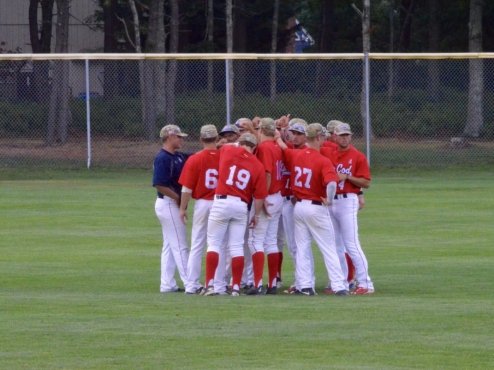 Jaskie had a tremendous outing giving up only two hits, walking one and fanning five Firebird batters in 6.1 innings of work. He received his first win of the playoffs.

It?s no surprise that the Big Ten product would start out dominating in this year?s playoffs. He had an impressive 0.98 ERA, with 27 strikeouts and only five free passes in 27.1 innings pitched during the regular summer season.

Sean Barry (San Diego) came in to relieve Jaskie in the middle of the seventh and was solid. He pitched 1.1 innings, with no walks and a strikeout.

Kevin Smith (Georgia, 0-1) got the start for the Firebirds tossing 3.2 innings, with two walks and whiffing two. He was credited with his first loss of the summer playoffs.

Kevin Smith (Maryland) was a thorn in the side of Orleans on both sides of the ball in the contest. He went 2-for-3 at the plate with one RBI and sparked the offense in the first and third inning. Not only that but at shortstop Smith made some spectacular plays and backed them up with his strong arm.? ?

Y-D got the bats rolling right out of the gates, as they grabbed an early two-run lead in the first inning.

Dillon Persinger (Cal State Fullerton) started it off for the Red Sox with a liner smoked into center field. An error in the outfield on Kevin Smith?s (Maryland) single, scored Persinger from first and allowed him to advance to third. A Brendan Skidmore (Binghamton) grounder that hopped past the outstretched glove of the diving Zach Kirtley (St. Mary?s) at second propelled Smith home.

Smith marked another tally for Y-D in the third on a solo blast crushed halfway up the trees in center.

Orleans followed up, recording one of their own in the top fourth. Brian Miller (North Carolina) snapped Jaskie?s no-hit run with a blooper that dropped in shallow left. Miller crossed the dish on a Riley Adams (San Diego) fielder?s choice. Y-D leveled out the inning with a run in the bottom half. Matt Winaker (Stanford) drew a walk to lead it off and was knocked home on a Joey Thomas fielder?s choice.

Y-D averted a big Orleans inning in the top of the ninth. The frame was underway with a quick Ryan Mahan (Kentucky) double ripped behind the bullpen in left field. Mahan advanced to third while Adams reached first on an error in the infield with no outs.? On an excellent play made by Persinger on the edge of the outfield grass, Mahan crossed the plate closing the Firebird deficit to two. Adams was sent to third on another Persinger putout, resulting in the second out of the inning. With the tying run at the plate, Calvin Faucher (UC Irvine) shut the door, recording his first save of the playoffs.

Y-D plays the second game of the three-game series at Eldredge Park on Saturday night. First pitch is at 7 p.m.