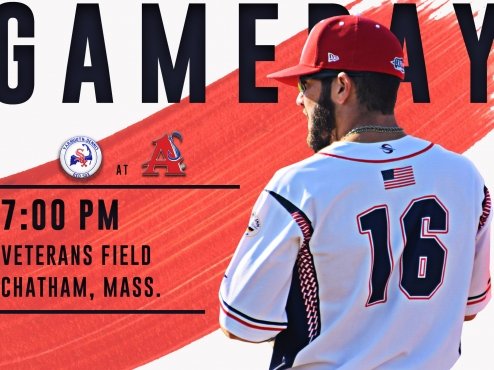 CHATHAM ? For the second night in a row, the Anglers separated themselves from the Red Sox with another head to head win. Y-D came out on the losing end of a back and forth 4-3 ball game. The loss puts the Red Sox four points behind the Anglers in the standings with only six games remaining on the schedule.

A lineup change didn?t affect the Sox in the first inning, as Riley King (Georgia) reached base with a one-out single. Brad Beesley (Cal Poly) then moved King to third with a double on the very next pitch. A passed ball allowed King to cross the plate and give the Red Sox a 1-0 lead. Unfortunately, they left Beesley stranded at third in what would?ve been a huge run.

Mark DiLuia (Maryland) was on the mound in what his first start of the summer. It didn?t look so good to open the game, as the first three Anglers reached base and loaded them up for their cleanup hitter. DiLuia didn?t let it phase him, he locked in and got Jamal OGuinn II (USC) to ground into a double play. A run scored, but DiLuia was able to get out of a bases loaded jam with no one out by only giving up the lone run. He only went one more inning, but struck out two batters and didn?t give up a hit.

Jack-Thomas Wold (UNLV) and Tate Samuelson (Cal Poly) each got on to kick off the fourth with base hits. After two quick outs were made, R.J. Yeager (Mercer) hit a grounder to third in what appeared to be an inning ending ground out. An error was made, allowing both Wold and Samuelson to score. Yeager was thrown out at third, but the damage was done as the Red Sox took a 3-1 lead.

Brandon Dufault (Northeastern) gave Y-D four innings out of the bullpen due to the early hook. He gave up two runs in the sixth which tied the game at 3 runs apiece, but he struck out six batters and didn?t walk any.

Chase Walter (Western Carolina) entered the game after Dufault and didn?t give up a hit. However, Ben Ramirez (USC) reached with a walk to leadoff the eighth. With two outs in the inning, he stole third and was all of a sudden only 90 feet from home. Thanks to an error on the following pitch, he crossed the plate and scored what would go on to be the game winning run.

Although the Red Sox have struggled against the top team in the Eastern Division, they will need to bounce back and win some games as the season is winding down. Although first place appears to be slipping away, the two seed is still important.

Y-D will travel to Harwich on Friday to play the Mariners at 6:30 P.M. at Whitehouse Field.