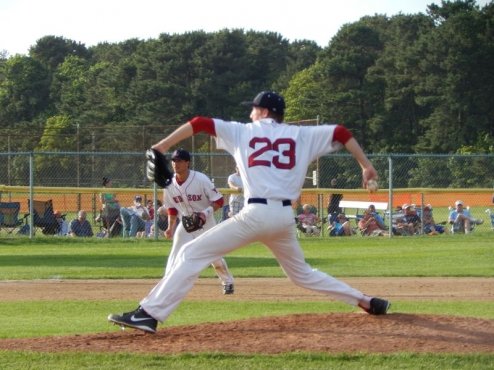 In a battle of back and forth action, the Yarmouth-Dennis Red Sox came out on top with a 6-5 win against West division foe Hyannis Wednesday night. Erick Fedde moved to 3-0 on the season despite allowing five runs on eight hits, two of the eight hits being home runs.

The Harbor Hawks got on the board in the first inning with a solo home run off the bat of Tyler Spoon. The Hawks lead didn?t too long as the Sox struck in the third for four runs of their own to take a 4-1 lead.

The box score doesn?t always tell the story as Fedde allowed five runs over seven innings of work. Four of those five runs were on two mistake pitches by Fedde and driven over the fence. Other than the two mistakes, Fedde was fantastic on the mound for YD.

Andrew Daniel came into the night on a 12-game hitting streak, and picked up two hits on the night to extend his streak to 13 straight games. Daniel has picked up a hit in every game he?s appeared in.

Kodi Kerski and Darrell Hunter threw two scoreless innings of relief for YD, with Hunter picking up the save in a 1-2-3 9th inning. YD moved to 8-8-1 on the summer as Hyannis dropped to 10-5.

The Sox are back in action tomorrow night as they travel to Hyannis to take on the Harbor Hawks for the second straight night.

From everybody in the YD organization, we wish you a safe and happy 4th of July!