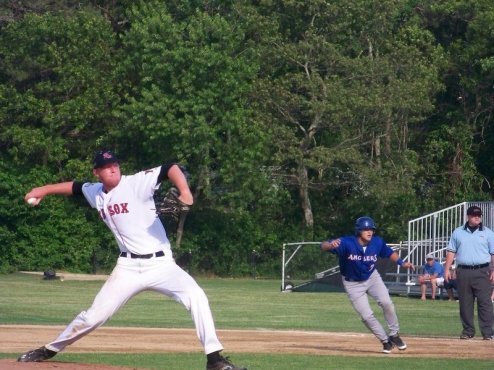 Trey Killian earned a four-inning save Tuesday night and the Wareham Gatemen snapped a five-game losing streak with a 6-3 win over the Yarmouth-Dennis Red Sox at Clem Spillane Field.

It was Yarmouth-Dennis? first trip to Wareham since August 16, 2012, a 5-1 victory in Game 2 of the Cape Cod Baseball League Championship.

Jeremy Null (Western Carolina) started on the hill for the Red Sox, who fell to 7-8-1. Null moved through the first inning relatively quickly but allowed eight batters to reach the plate in the following frame. Ethan Gross singled, allowing Christopher Chinea to open the scoring for Wareham. Two additional unearned runs scored after an E4 with two outs. Null was relieved after throwing 3 and 1/3 innings and 81 pitches, allowing five runs. The Red Sox used five pitchers on the night, including James Kapriellan (UCLA), who was activated Tuesday.

Y-D scored two runs in the third, when Andrew Daniel and Alex Blandino scored on a 4-3 groundout and double, respectively. The Red Sox tacked on another run in the top of the eighth when a Taylor Gushue triple plated Kyle Wood.

Gross fouled off the first pitch of his at bat in the fifth inning after a check-swing. The ball appeared to hit catcher Wayne Taylor on the right hand, after which trainers examined him. He stayed in the game until Gushue replaced him to start the bottom of the sixth.

Cole Stancil stood out at the plate for the Gatemen, going 3 for 4 on the night with a single and two doubles.

U.S. Olympic Gold Medal winner Aly Raisman, a Massachusetts native, was in attendance. Raisman threw out the ceremonial first pitch and was later surrounded by fans seeking autographs and photos.

The Red Sox return to Red Wilson Field Wednesday to begin a home-and-home series with the Hyannis Harbor Hawks, with Erick Fedde expected to get the nod from manager Scott Pickler. First pitch is at 5:00 Eastern Time.