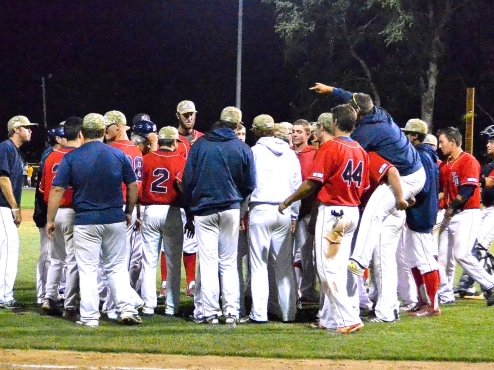 ORLEANS, Mass. ? The Yarmouth-Dennis Red Sox are headed to the Cape Cod Baseball League Championship after a thrilling 2-1 victory over the Orleans Firebirds on Saturday.

Pitching had gotten the Red Sox this far in the postseason and they relied on it again in game three at Eldredge Park. Dustin Hunt (Northeastern) took the mound for the Sox, facing the previously undefeated Mitchell Jordan (Stetson).

Jordan finished the regular season with a 6-0 record, a 0.20 ERA and had not given up a home run all summer. That changed in the first inning on Saturday when Gio Brusa (Pacific) put the Red Sox on the board with a solo home run.

Hunt hadn?t pitched a full six innings in any outing this summer but lasted 7.2 innings in this victory. Hunt struck out ten batters, walked one batter, and only allowed two hits. This was by far his best outing of the season and it came at the right time.

After the game Y-D Manager Scott Pickler said, ?That?s a very good team that we beat. To get where we are now someone was going to have to step up. Dustin Hunt did that for us tonight.?

A big eighth inning rally by the Firebirds gave them one run and almost more. Orleans scored their only run of the game when Michael Donadio (St. John?s) missed a routine fly ball in left field. The inning continued when Alex Call (Ball State) reached first base on a throwing error by third baseman Dallas Carroll (Utah).

Donnie Walton (Oklahoma State) was able to end the inning with an impressive dive-and-roll defensive play at shortstop and the Red Sox never looked back. Hockin struck out Daniel Pinero (Virginia) to end the game and send Y-D on to the next round.

Brusa scored the winning run on Friday and scored both runs in their series-clinching win on Saturday. He homered in the first inning for the first run and was knocked in by Walton in the eighth after hitting a double to right field.

When asked how it felt to go 2-for-4 in the playoffs against one of the best pitchers in the league, he said, ?I love the challenge. (Mitchell Jordan) is a great pitcher. I closed my eyes, said a prayer, and luckily ran into one. Anything can happen (in the postseason). It?s a new season. These games are really meaningful so it?s just a lot of fun to come out and compete.?

The Cape Cod Baseball League Championship will feature the Red Sox and the Hyannis Harbor Hawks. Action begins in Hyannis at McKeon Park at 6 p.m. on Sunday.