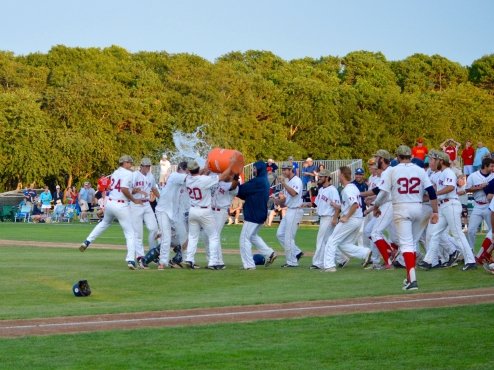 SOUTH YARMOUTH, Mass. ? It took 13 innings but the Yarmouth-Dennis Red Sox evened up the East Division Finals at one game apiece with a 2-1 victory over the Orleans Firebirds at Red Wilson Field on Friday.

The 4 p.m. game moved quickly despite the extra innings because of the impressive pitching performances by both teams. Cory Malcom (Arkansas Little Rock) got his second start of the season and of the playoffs on the mound for the Sox. He only lasted two innings in his start against Brewster, but went 6.1 innings in the win, allowed four hits, and gave up one run. He struck out seven batters to make his total 27 strikeouts in ten appearances this season.

He said, ?Whenever they need me I?ll be ready to go. It?s not as big of a crowd (as the College World Series) but the intensity is still there. Everyone really wanted to win and it was a fun one to be a part of.?

Orleans? Tanner Tully (Ohio State) also impressed in his last start of the summer. He lasted six innings before Chandler Blanchard (Pepperdine) came in and shut down the Sox for another six.

Both teams combined for only 13 hits over the course of the game that lasted over three hours. Tommy Edman (Stanford) said, ?The game actually went by pretty fast because everyone was throwing up zeros but it is definitely pretty tough to stay focused throughout all that, especially in a high intensity game like that.?

The exciting game culminated in the bottom of the thirteenth inning when Y-D loaded the bases with one out. Dallas Carroll (Utah) grounded a ball back to the pitcher who was able to throw Edman out at the plate.

When asked about the close play at the plate, he said, ?It was definitely a close play but I had to go back to third in case the pitcher caught it on a line drive so I can kind of got a bad jump on it. Luckily we were able to finish it on the next batter.?

With the infield in and Gio Brusa (Pacific) at third base, everyone at Red Wilson was holding their breath while Michael Donadio (St. Johns) stood in the batter?s box. Orleans? pitcher Jared Carkuff (Austin Peay St.) wound up and threw a wild pitch that skipped past the catcher to the backstop.

Brusa crossed the plate for the winning run and a Gatorade cooler was immediately dumped on his head by his teammates. He said, ?I was being aggressive and visualizing it. When (the ball went by the catcher), I was ready for it.?

With this close win, the Red Sox live to see another day and will play the Orleans Firebirds again tomorrow at 7 p.m. at Eldredge Park, with the winner advancing to the Cape League Championship.