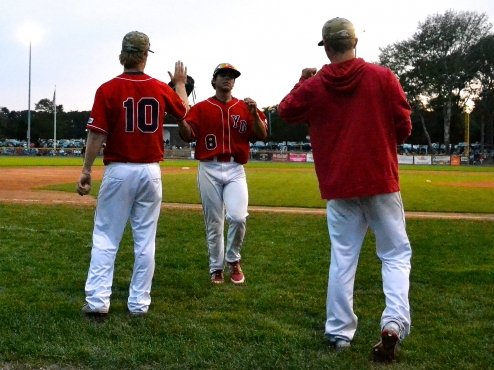 PARKING ADVISORIES: Game 1 of the Cape League Championship at McKeon Park in Hyannis is scheduled in line with the 30th Annual Pops by the Sea, which will take place on the Hyannis Village Green from 5 p.m.-7 p.m. Fans attending the Y-D vs. Hyannis game are advised to arrive early at the park. Parking will also be restricted along Main Street due to Pops by the Sea.

Along with Pops by the Sea, a large mass will be taking place at nearby St. Francis Xavier Church.

Due to increased crowd turnout, fans attending Game 2 Monday are also advised to arrive early at Red Wilson Field. In addition to immediate proximity to the field, parking is available free of charge along the front and north sides of Dennis-Yarmouth Regional High School.

How They Got Here: Y-D (22-22) finished third in the East Division and clinched its playoff spot on the final day of the regular season, while the Harbor Hawks (24-19-1) won the West Division regular season crown.

The Red Sox defeated Brewster 2-0 in the East Division Semifinals, followed by a 2-1 series win over Orleans in the Division Finals.

Hyannis cruised to sweeps in the West Semifinals and Finals over Cotuit and Bourne, respectively.

Series Notes: This is the second time that Yarmouth-Dennis and Hyannis have met for the League Championship. In 1989, Y-D swept Hyannis 2-0 to capture its first of back-to-back titles.

The Mets/Harbor Hawks have won three championships in franchise history, defeating Harwich 3-1 in 1978 and 1979, while also sweeping Chatham 2-0 in 1991.

Y-D in the Cape League Championship

After sweeping the Falmouth Commodores in 2014, the Y-D Red Sox will attempt to win back-to-back Cape League Championships for the third time in franchise history. Y-D last accomplished the feat after defeating Wareham in 2006 and Falmouth in 2007.

About the Hyannis Harbor Hawks

Local product Bobby Melley of Centerville, Mass. spent a brief period of time with Hyannis at the start of the summer, rejoining the team during the final weekend of the regular season. Melley (Connecticut) has posted a .385 average in the playoffs and also had a 4-for-5 day with 2 RBI against the Red Sox on August 2.

Devin Smeltzer (Florida Gulf Coast) helped compose many highlights of the Hawks? pitching staff during the regular season. Smeltzer threw a no-hitter at Harwich on June 20.

In addition, Northeastern?s Aaron Civale has been solid in the closer?s role for the Harbor Hawks. Like Smeltzer, the rising junior earned All-Star honors in July and has posted a microscopic ERA (0.32), earning six saves in the process.

Chad Gassman is in his seventh summer managing the Harbor Hawks. Gassman also served on the Hawks? staff as an assistant coach in 2008 before being promoted prior to the 2009 season.

Pitching Propels Yarmouth-Dennis into CCBL Championship: The Y-D pitching staff was one of many integral components in the Red Sox? series wins over both Brewster and Orleans.

Bennie and the (Sox)

Game 2 was marked by 5 innings of solid relief work from Ben Bowden, who finished with a span of 13 consecutive batters retired. The Lynn, Mass. native struck out five and still has yet to surrender a run in 27 innings pitched on Cape Cod.

After spending the 2014 season with the Brewster Whitecaps, Gio Brusa (Pacific) returned to the Cape this summer with the Y-D Red Sox.

Brusa has served as an offensive spark plug, clubbing nine homers in 2015, including a solo shot in the first inning of Saturday?s Game 3 at Orleans. He also scored Y-D?s other run that night, coming in on a single by Donnie Walton (Oklahoma State).

With the bases loaded and two outs in the 13th inning, Michael Donadio (St. John?s) stepped to the plate. After working into an 0-2 count, a wild pitch allowed Gio Brusa to slide in safely and give the Red Sox the victory.

It was Y-D?s first postseason walk-off win since August 6, 2011, when the Red Sox posted a four-run ninth to defeat Orleans 11-10 and advance to the East Finals.

At the helm of the Y-D Red Sox since 1997, this is Scott Pickler?s 12th playoff appearance with the Red Sox.