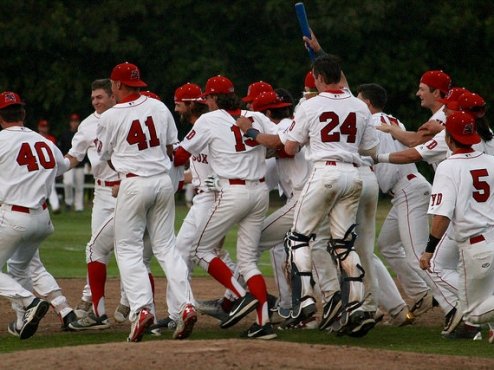 rn by Michael McClearyrnrnThe Cape League released its rosters for the 2017?Cape League All-Star team. The Red Sox play in the eastern division and represent six members of the 26-man team.rnrnAmong those chosen by Y-D is Nico Hoerner, who holds an impressive .316 batting average as an everyday player for the Red Sox. ?He is second on the team to Christian Koss, who doesn’t appear in every contest. He will be starting at third?base in the game.rnrnAlex Mckenna is another player who will wear the eastern all-star jersey. ?He’s had two separate stretches in which he’s had a hitting streak over five games. He will be starting in center for the east. ?rnrnThree Y-D players were named to the ten-man starting lineup for the game. ?Kris Bubic will be that starting pitcher in the game with Hoerner and McKenna playing behind him. ?Bubic holds a 3-1 record with a 1.58 earned run average while striking out 25 batters in his four appearances.rnrnThe Red Sox will have one position player reserve in Kyle Isbel, who has been on a hot streak as of late.rnrnRepresenting the bullpen for Y-D will be Riley McCauley and Brendan Nail. McCauley leads the Cape league with seven saves and Nail has been a reliable pitcher all season for Y-D. ?He makes the game on a temporary contract after collecting 26 strikeouts and a 1.37 ERA.rnrnThe game will be played on Saturday, July 22 at Spillane Field. Gates open at 2:00 pm and the first pitch is scheduled to be at 6:05 pm.rnrnUpdate (7/16): Carlos Cortes will now join the East team as an all-star replacement.rn