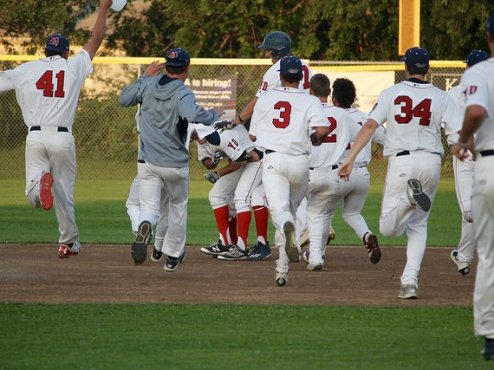 Hoerner stood in the box as the catcher stood and extended his right arm towards the left-handed batter?s box. Being 0-4, Hoerner was just looking to make a play to help his team. Following a slow grounder to shortstop by Christian Koss, Hoerner got that chance on the basepath and his efforts may have saved the game for the Red Sox.

“As the trail runner, you really don?t have much importance,? Hoerner said. ?The only thing you can do is beat the throw to second and that?s the only thing I was thinking about. ?Glad I could do it.?

Hoerner provided what could be the most important play of the game with his slide into second to escape what seemed like a sure out. ?This opened the door for Alex McKenna to hit a walk off single on the very next at-bat of the game. ?McKenna earned the ice bath after the game, but players and coaches alike were all stunned with Hoerner?s ability to steal one for the team.

“That play at second you don?t see that often,? Manager Scott Pickler said. ?He?s the best baserunner I?ve had up here and when they play that hard we always have a chance.?

Pickler didn?t even seem impressed by the hit by McKenna, which McKenna had said wasn?t his best swing either, but rather was impressed by his team?s will to win in the close situations it has had.

Despite being second on the team in batting average and being one of the Red Sox most reliable players on both sides, Hoerner has distinguished himself with his hustle plays. In a game on June 19, Hoerner beat out a chopper to shortstop for his only hit of the game. ?In a similar situation, he saved the inning and was able to work his way around the bases to score the decisive run of the game off of a RBI bunt by catcher Kole Cottam.

McKenna, who was just named as an all-star starter earlier that day, loves what he?s seen from Hoerner all summer long.

“(Hoerner) is the smartest baseball player I?ve ever had the opportunity to play with, he just understands the game,? Hoerner said. ?He saved the game, I don?t even get a chance if he doesn?t do that.?

McKenna?s hit Saturday was the third game-winning hit the Red Sox have had over its past four games. ?Two had come off of the bat of Alfonso Rivas, walking off one time and batting in the game-winning RBI in the top of the ninth on Friday.

With the bases loaded following Hoerners game-saving slide, McKenna delivered a high chopper which just was able to bounce high enough over the outstretched arms of the Hyannis third baseman. McKenna didn?t want too much credit for his clutch performance.

“I didn?t even put that great of a swing on it that time, it?s just baseball,? McKenna said. ?That could be the baseball gods rewarding me for lining out a few times, you just never really know.?

McKenna continued that he doesn?t feel he?s been taking his best swings over the past few games. ?He is coming off of his second plus-five hitting streak, so his production over the past two games is minimal in comparison to his past stretches, despite the walk-off experience.

Hoerner said that lucky bounces often happen in baseball. ?He continued that it bounced Y-D?s way on Saturday, but sometimes that won?t be the case.

McKenna hopes in the future that the Red Sox won?t need the walk off and can get production earlier in games to limit the tension. But, he is enjoying the experience for now.

“You dream of being in situations like this, you play the situations over and over again in your head,? McKenna said. ?I think your crazy if you don?t want to be in those situations. You have to prepare yourself, so when you do get those opportunities you some through.?

The Red Sox have been enjoying its clutch run. Pickler said after the 7-3 loss on July 13 that Rivas? hit in the previous game ?brought the team closer together? and it has been a fun ride for all of the players.

Players cheered and laughed as McKenna had an ice-water bath dumped on him after the game. ?It was a moment of pride for the Red Sox, who look forward to more opportunities like this in the future.

“It feels pretty good, a little cold, but good,? McKenna laughed of the ice bath. ?I?m glad I got it, it means I did something good.?