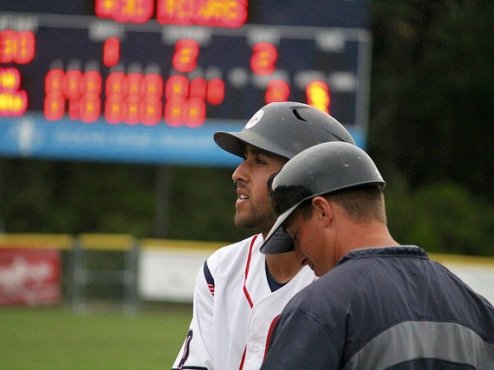 rn by Michael McClearyrnrnThe crowd exploded as Alfonso Rivas rounded first base.?rnrn”Mr. Clutch,” Arizona teammate Nick Quintana yelled from the dugout.rnrnFor the second time in the past three games and with the offense on both sides lifeless for much of the game, in what Y-D players classified as a “pitcher’s duel”, Rivas got the call in the clutch and he?delivered.rnrn”Wherever?I go, wherever?I play I want to do well,” Rivas said. “I’m confident?in those positions, It’s where I’m more comfortable.”rnrnRivas delivered the game winning hit on a pinch hit single in the ninth inning on Tuesday at Stony Brook field. For the second time this season, Rivas has given the Red Sox a clutch hit in the ninth inning of the game. Despite being his first at bat of the game, Rivas was able to make an instant impact and earn further credibility as the Red Sox most efficient clutch performer.?rnrn”Being cold, the first couple of pitches you see are right there,” Rivas said. “The approach doesn’t change, I’m still looking for a ball up in the zone and a good pitch to hit.”rnrnDespite Rivas’ past success in the clutch moments of games, the Red Sox decision to have him take that at bat was a bold?one. He pinch-hit for Alex McKenna?who has been one of the Red Sox hottest hitters as of late and was looking to add to his then six-game hitting streak.rnrnQuintana, who says he’d been watching Rivas perform late in games all year for the Wildcats, was excited about his teammate’s successes.?rnrn”He’s just clutch,” Quintana said smiling. “He’s just so loose, so carefree, has fun. I see that and I’m like, ‘Oh. He did that all year for us.’”rnrnThe Y-D pitching kept the game close all game long. ?Brendan Nail starred in the game tossing three scoreless innings while striking out seven. With just three runs all game, the defense on both sides held its own, waiting for someone to make the first strike on offense.rnrnSome of the more memorable moments all season for the Red Sox have been painted with gestures. On a July 5th game at Hyannis, Nico Hoerner threw his hands up signaling his excitement with Y-D ending their three-game scoreless streak. On Friday, again Hoerner showed pride as he took second on a single after reading the throw in from the outfield. ?He slid in, hopped up and clapped high over his head. And, following his big hit, Rivas pointed to the sky before greeting his coach at first base.rnrnQuintana noted the Red Sox team is able to build off these gestures and use them as a way to get loose and ready for the next strike. Rivas stayed humble when describing his salute to the clouds.rnrn”Just give thanks to God,” Rivas said. “For all the opportunities, for everything, just giving thanks.”rnrn”Fonsy” as Quintana calls him, continues to be one of the Red Sox hottest hitters. He’s boosted his average to .293 with the cameo appearance and is inching closer towards the production that allowed him to hit .371 in one of college baseballs elite conferences, the Pac-12.rnrnManager Scott Pickler made the decision to go with Rivas late in the game and it was a success.rnrn”He’s a very confident man at the plate,” Pickler said. “He was the right guy to have up there, he came through in the clutch.”rnrn?Quintana, who’s been in a bit of a slump, has enjoyed watching Rivas succeed. ?He says it has motivated him to try and break out of his tough stretch and have a hot streak of his own. ?He continues that, since they play together, “if he slumps I got his back and if I slump he’s got mine.”rnrnWhile Quintana came onto the Cape as one of the Red Sox hottest hitters, still leading Y-D in home runs after his early season explosion, Rivas started out a bit slower. ?But, Quintana knew it was only a matter of time.rnrn”It’s just getting comfortable and getting your feet wet,” Quintana said. “It’s just being loose and doing what you can do. That’s what he’s been doing, it’s phenomenal to watch.”rnrnThe Red Sox players were fired up after the win. ?They crowded around and cheered after the final pitch sent them just three points away from the first place Firebirds.rnrn”Sox on top,” Karl Blum yelled to the crowd.?rnrnWith almost half the season left to go and the Red Sox heating up, it’s starting to look that way.rnrn?rnrn?rn