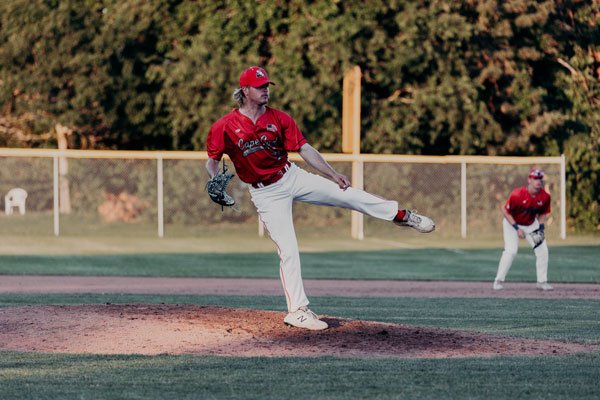 Make some space, John Schiffner. You’ve got some company at the top.

“It’s great to see him accomplish everything he’s done in this game and to help us out along the way, too,” Y-D assistant coach Steven Phillips said. “There’s not a better guy to work for. He’s a great guy and I’m really happy for him.”

Western Carolina’s Pas Ferreras hit a solo home run in the bottom of the sixth to break a 2-2 tie, and Point Loma Nazarene’s Zach Veen carried it the rest of the way. Veen earned the win on the mound with 3.1 shutout innings, giving up just two hits and striking out six.

“Veen came in and was dominant tonight,” Y-D assistant coach Craig Giannino said. “A great team win, and a great win for Pick.”

Washington State’s Grant Taylor got the start on the mound for Y-D, pitching five innings of one-run ball, scattering three hits and striking out six.

“Grant Taylor set the tone for us early tonight,” Giannino said. “We’re getting better. We’re really starting to come together as a group.”

Offensively, Taylor was buoyed to a 2-1 lead after LSU’S Jordan Thompson jumped on the first pitch and crushed a two-run homer to left. It was Thompson’s first home run of the summer, and he said it felt good to get around on one.

Taylor gave way in the sixth inning to Matt Kavanaugh, who got two quick outs but then ran into some trouble. After Chatham tied the game on an error, Kavanaugh walked pinch-hitter Nick Nankil to load the bases.

Pickler made his move to the bullpen to bring in Veen, who quickly recorded a flyout to end the inning.

Moments later, Ferreras led off the bottom of the sixth with his home run, a deep shot to right-center that carried out of the park and into the trees beyond the fence. It was Ferreras’ second homer of the summer, and his second extra-base hit of the day after a double in the second.

“It was a huge momentum shift,” Giannino said. “Pas gave us a huge jolt right there. He’s an emotional kid that has a lot of passion when he plays the game, and he’s playing with a lot of confidence right now.”

Veen worked the rest of the way on the mound for Y-D. Though he labored through his first appearance of the summer earlier this week, Veen looked like a man on a mission Friday night. He worked quickly through batters, used his fastball effectively, and, after giving up a double with two outs in the ninth, composed himself to strike out Jake DeLeo to seal the win.

“[I was] a little bit looser,” Veen said. “I got rid of the first-game jitters. Everything was just working today, it was perfect.”

The Red Sox got back in the win column after a Wednesday night loss to Orleans. The win moves Y-D into first place in the Eastern Division with 12 points, one ahead of Orleans and two ahead of Brewster and Harwich.

Scott Pickler will look for career win No. 540, and the Red Sox will look to keep their momentum going Saturday night at Cotuit. First pitch at Lowell Park is scheduled for 5 p.m.