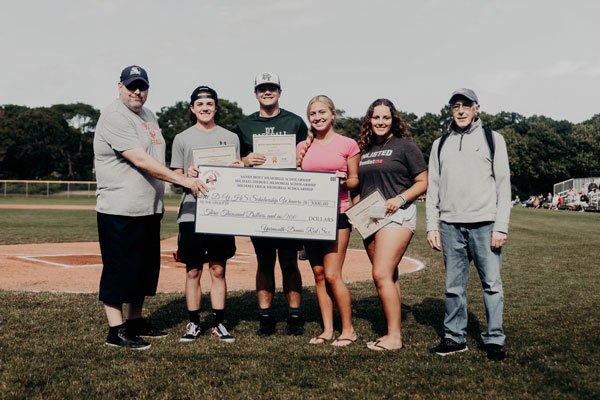 The Yarmouth-Dennis Red Sox awarded scholarships to five local students this summer to assist them in their collegiate studies, with the students honored at Y-D’s home game against the Harwich Mariners on June 18.

The scholarships are all named in memory of past members of the Yarmouth-Dennis Red Sox organization.

The Mike Deibolt Memorial Scholarship is awarded to one male and one female student. Mike Deibolt played for the Y-D Red Sox in 1995 as a left-handed pitcher from the University of Minnesota. He was a minor league pitcher with the Detroit Tigers in 1997 and was headed to visit his parents at the conclusion of the season.

Mike suffered a seizure while driving to his parents’ home and died in an automobile accident at the age of 22 in suburban Cleveland, Ohio.

The Michael Frick Memorial Scholarship is awarded to one male and one female student. Michael was a right-handed pitcher who played for the Y-D Red Sox in the 2000 season. He set college records at Cal State Northridge in appearances and saves. He was drafted in the 8th round of the 2001 draft by the Oakland A’s.

Early Thanksgiving morning November 27, 2003, he died as a passenger, along with 2 other occupants, in a one-vehicle automobile accident near his home in California at the age of 23.

The Sandi Hoyt Memorial Scholarship is awarded to one student. Sandi Hoyt was a familiar face of the Y-D Red Sox organization, for which she worked tirelessly for 19 years. She served as President for 5 years and was a big part of the effort behind the Red Wilson Field renovations. Hoyt helped build and manage the concessions area for 10 years.

The Y-D Red Sox are proud to support and give back to the community that opens its arms and welcomes a new group of college athletes each year. In addition to these scholarships, the Red Sox participate in other events and promotions throughout the year to support the community. These include a donation drive for the Yarmouth Food Pantry, Red Shirt Fridays and Heroes of the Game, the Dagny Foundation Charity Run, Relay for Life of Cape Cod, and more.