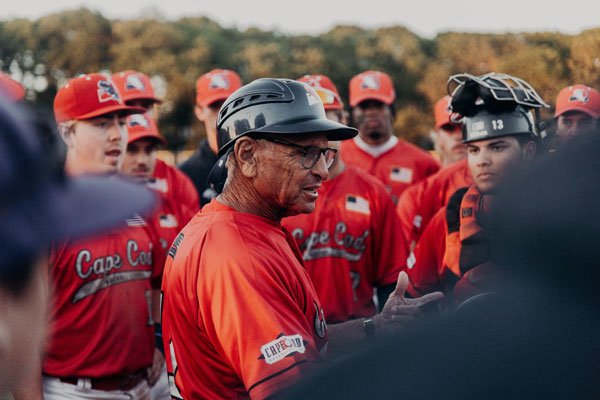 In his twenty-fourth season at the helm of the Yarmouth-Dennis Red Sox, Scott Pickler now stands alone on the Cape Cod Baseball League coaching mountaintop.

With a 5-3 win over the Cotuit Kettleers Saturday night at Lowell Park, Pickler is now the all-time winningest coach in Cape League history with 540 wins. He passed longtime Chatham field manager John Schiffner, who held the record since 2007.

“I love it here,” Pickler said. “There’s not much better than coaching in the Cape. You’ve got good players, and we’re trying to get them to the next level. The competition’s good, the coaches in this league are great. It’s fun to compete, I love to compete.”

But while the top of the mountain is a lonely place, the path to get there is paved by all the people who helped Pickler get to the summit: coaches, players, staff members, and the Y-D community.

And his impact on the players who come through is unmatched.

“Pick’s the guy to play for up here,” Y-D pitcher Jared Lyons, who played for Y-D last summer as well, said. “I think that’s pretty clear.”

Each summer, Pickler dispenses wisdom to a new group of college players who hope to one day play at the next level. Coming from someone who has helped so many on their quest to play in the pros, his advice is impactful.

Pickler’s impact is not just felt on the field, but off it. He encourages the players to participate in community events in hopes of bettering them as young men. Before a home game against Harwich this season, Pickler had his players support Relay for Life Cape Cod, which was happening simultaneously on the Dennis-Yarmouth High School football field. And again after the game, Pickler had his players go and walk a few laps in support.

“It’s really not about him, it’s about us,” Y-D infielder Pas Ferreras said. “He’s always trying to better us as players and as young adults. I felt like I matured playing with him.”

For Pickler, it’s the importance of being a part of the community for the summer that he wants to emphasize to the players. Playing baseball on the Cape is only half of it.

“Every town wants to win up here,” Pickler said. “These people rally around these guys.”

Part of his biggest impact is in how he works with hitters. Watch a Y-D batting practice, and Pickler will be right behind the cage the whole time looking at swings. After rounds, he’ll pull hitters off to the side and give them instructions, ranging from major to minor. He may tell a batter to load up earlier or decrease his stride length. If he sees fit, he’ll tell the player to stay and work through for more rounds of live hitting.

It’s not even just in batting practice. In a game against Harwich earlier this year, as soon as Y-D shortstop Hunter Haas advanced to third base in the third inning, Pickler began giving him pointers on his swing. It’s part of Pickler’s mission to help his players to success..

“To get to the next level, you’ve got to make adjustments,” Pickler said. “And you’re fixing little things, not big things. These are guys that I think can be really good players if they fix something.”

No matter what the change is, it tends to pay off.

Ferreras, another Y-D returner, said last season he hit a few balls in a row straight into the top of the turtle during his first batting practice. Immediately, Pickler pulled him aside and had a conversation that lasted nearly 30 minutes about adjustments.

The next day in the season opener against Brewster, Ferreras had two hits, including a clutch two-run single in the ninth inning to secure a tie for Y-D.

“He came up to me after the game and said, ‘See, I told you what we worked on would work,’” Ferreras said.

It’s not just the hitters — Pickler calls the game for pitchers on the mound every day, and works to help them improve. It helps bring players not only to Yarmouth, but also to bring them back for another year.

“I like the team, like the field, and love Pick,” Y-D returner Eric Yost said. “He calls a good game for me.”

A key reason for pitchers’ success under Pickler is due to how he imbues them with confidence. Pickler tells pitchers to trust their stuff, and Lyons said that extra vote of confidence has paid dividends for him.

For Lyons, who played the last four seasons at George Mason University, he was encouraged to come up to play for Pickler by his pitching coach, Shawn Camp. A former Major Leaguer who played a year on the Cape for Chatham, Camp has a good relationship with Pickler, and helped give Lyons a shot.

“I’m willing to do anything for that guy,” Lyons said. “He’s giving me the opportunity to put myself in front of all these scouts, give myself a chance to play at the next level. I wouldn’t have that shot if it wasn’t for Pickler believing in me.

“I’d play for that guy any day of the week.”

Yost spent last summer working on his game with the staff at Y-D. His improvement at the college level was marked. He ended the regular season at Northeastern with a 1.84 ERA, and earned All-Colonial Athletic Association Honorable Mention honors, as well as being named to the NCAA All-Northeast Second Team.

“He and all the coaches really help my pitches get better,” Yost said. “I developed a lot here last summer, so I hope to do the same again here.”

For former players, his wisdom helps them even as they move past their playing days. Steven Phillips played for Pickler at Cypress Community College in 2015 and 2016. Now an assistant at Y-D, Phillips is right by Pickler’s side.

“He’s my mentor,” Phillips said. “It’s great to see everything he’s done in this game, and to help us out along the way, too. There’s not a better guy to work for. He’s tough, but he’s a great guy and I’m really happy for him.”

Over 120 former players of Pickler’s have heard their names called in the MLB Draft, with even more to come later this summer. There are plenty of big name players who went to the Majors after playing under Pickler’s tutelage, but there are so many others who he has impacted along the way.

“When we had his 20th year celebration, they had video tributes from so many players that played here,” Wilson said. “The Buster Poseys, the Chris Sales, the average players, players who maybe didn’t make it to the Major Leagues. With all the comments coming, you could feel the respect and the love that they had for him.”

His impact stretches further than just the Red Sox. Across the Cape League, Pickler’s legacy is known. Longtime Orleans field manager Kelly Nicholson described Pickler as a “brilliant baseball mind”. The two have gone head-to-head since 2005, when Nicholson took over the job at Orleans.

“He’s my best manager friend on the Cape,” Nicholson said.

Nicholson works at Loyola High School in California, and he and Pickler occasionally get lunch in the offseason. But when the summer season begins, it’s no longer fun and games. Nicholson’s Orleans team went over 1,000 days between wins over Pickler’s Red Sox before a June 22 win this summer.

“Y-D’s kind of had our number, so I don’t have any fun memories of facing him,” Nicholson said.

Throughout his career at Y-D, Pickler has won the Cape League Championship six times, and finished as regular-season East Division champion in five seasons.

He was named the head coach at Cypress Community College in 1985, and since then has won five California state titles and earned National Coach of the Year for California Junior Colleges on four occasions.

Really, all he’s done is win wherever he goes. Win and help players develop. For a man who epitomizes what it means to be a coach, he has earned each and every one of those 540 Cape League wins. It’s been 26 years, and each Cape League year is long. The wins, and the milestone, are worth celebrating.

But for Y-D and coach Pick, it’s back to business right away.

“It’ll be in the rearview mirror just like that,” Wilson said.