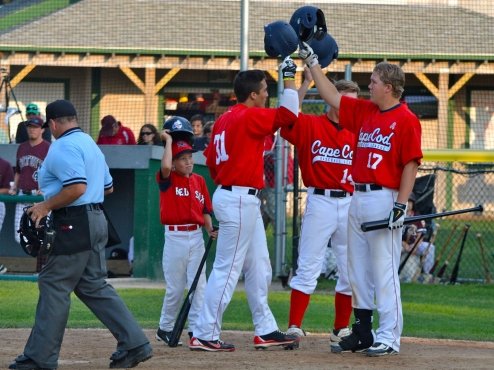 SOUTH YARMOUTH, Mass. ? ?It definitely boosted my confidence,? said Rob Fonseca (Northeastern) on hitting a homerun over the Green Monster at Fenway Park this past Tuesday at the Cape League workout day. That it most certainly did. Fonseca took the plate in the bottom of the seventh inning, with two outs, and Y-D down by a run and blasted the go ahead two-run homerun to give the Red Sox the 4-3 lead and eventual victory.

Justin Jacome continued his dominant pitching performance in the Cape league as he is now undefeated. Friday night?s win was his fourth win for the Red Sox. He pitched seven innings, allowing one earned run and three hits while striking out two Kettleer batters.

In familar fashion, the Red Sox battled for the lead in yet another back and forth game. Cotuit struck in the first inning as John Norwood (Vanderbilt) scored on Jordan Ebert?s (Auburn) ground ball. The next run would also be scored by Cotuit in the fifth inning on a Y-D error. Down two runs, Y-D?s Jesse Jenner (San Diego) hit an RBI single into center field to allow A.J. Simcox (Tennessee) to score in the fifth inning. The Kettleers would answer back in the next inning with another run scored on a Y-D error.

Y-D struggled to bring baserunners home as they stranded eight Red Sox in the game. However, Y-D?s Fonseca was able to bring in a runner when it mattered most. Fonseca?s go ahead two-run homerun in the bottom of the seventh was enough for Y-D to bring them to victory.

Drake Owenby (Tennessee) pitched one inning of relief, only allowing one hit. Diimitri Kourtis (Mercer) got two of the three final outs of the game, while Billy Strode (FSU) got the final out with a strikeout.

The Yarmouth-Dennis Red Sox have their sights set on playoffs. Y-D won their third straight game with their win over Cotuit and have won 12 of their last 15 games. Friday night?s meeting between Y-D and Cotuit was their last regular season matchup. The Red Sox were able to even the record at 2-2 on the season against the Kettleers. If these teams meet again this summer, it will be in the Cape League Championship.

The Red Sox will travel back to Chatham Saturday night as they will face the A?s again. First pitch is set for 7 pm. Y-D will begin a four-game homestand this Sunday.