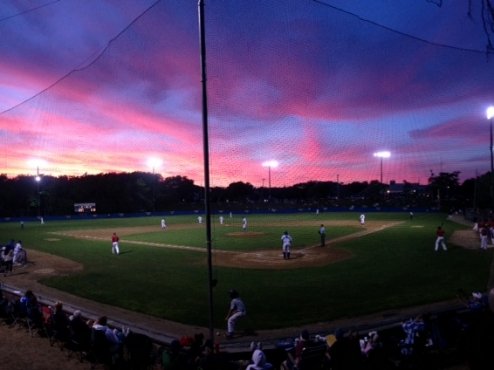 The sun sets over Veteran?s Field during Y-D?s game in Chatham.

CHATHAM, Mass. ? Y-D?s record against Chatham going into Thursday night?s game was 0-2, with both losses being at home. The Red Sox were determined to get a win against the Anglers and better yet, they were going to get the win on the road. ?The three hour marathon game was a back and forth rally between both teams and Y-D?s ninth-inning rally proved to be enough for them to achieve the win.

Cody Poteet (UCLA) provided a strong seven innings for the Red Sox. Poteet allowed two earned runs, five hits, while striking out three Anglers. ?Poteet shut down Chatham in the first inning but an RBI single from Bryant Burleson (Texas Tech) in the second inning would give Chatham the 1-0 lead. Y-D?s offense fought back immediately as they would score twice in the third innning with two outs. ?Josh Lester (Missouri) hit a bounce grounder that was just enough to allow to be an RBI single, allowing Jordan Tarsovich (VMI) to score the tying run. Chatham?s starting pitcher Garrett Williams (Oklahoma State) would then give up another run on an RBI walk to Vincent Jackson (Tennessee).

Y-D held on to their 2-1 lead for a full inning until Burleson RBI single allows Nick Collins (Georgetown) to score and tie the game back up at 2-2. This tie would last all the way until the top of the seventh inning. Y-D?s Rob Fonseca (Northeastern) hit an RBI single to allow Jesse Jenner (San Diego) to score the run and take back the lead. Jenner?s teammate from San Diego would take the mound for Chatham after that, P.J. Conlon got out of the seventh inning without allowing any more Red Sox score.

Phil Bickford (Cal State Fullerton) entered the game for Y-D in the bottom of the eighth inning with a Chatham runner on third and one out. ?Bickford pitched back-to-back strikeouts to end the threat, however Chatham tied the game again. Bickford continued to bring the heat with his stellar fastball, striking out four and giving up just two hits.

Then came the ninth-inning rally from the Red Sox. Andrew Stevenson (LSU) got things going as he advanced to third base on an overthrow pickoff attempt by Conlon. With no outs in the inning, Jenner hit the clutch RBI single off his San Diego teammate to bring Stevenson home. Brennon Lund (BYU) pinch hit with Red Sox on second and third base and hit a clutch two-run single to push Y-D ahead of Chatham 6-3, that would stand to be the final score.

With the 30th game of the 44 game Cape season completed, the push for the playoffs are in full force. Y-D will continue to fight to hold onto to their third seed spot in the East Division as they face the Cotuit Kettleers back at Red Wilson Field on Friday night. The Kettleers also are trying to hold onto their third seed spot in the West Division. First pitch is set for 5 pm.