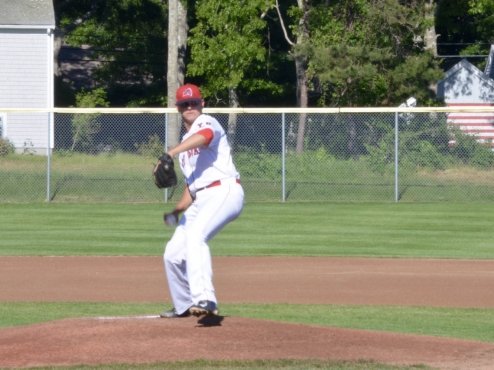 SOUTH YARMOUTH, Mass. ? The Yarmouth-Dennis Red Sox took the win Friday night against the Cotuit Kettleers, 3-2, on a walk-off single by Brendon Skidmore (Binghamton) in the bottom of the ninth inning, scoring Matt Whatley (Oral Roberts). The Red Sox impressed on both sides of the ball tonight in what was their best game of the 2016 season thus far. Nathan Kuchta (San Diego) earned the win in relief, moving to 1-0, while Ryan Rigby (Mississippi State) was tagged with the loss and moved to 0-1 on the season.

Will Gaddis (Furman, 0-1) made his second start of the season for Y-D. In his first outing on opening day, Gaddis allowed three runs in five innings of work, while striking out five. While the final line isn?t excellent, he pitched better than the line suggests and located well with his off-speed pitches after settling down.

Eddie Muhl (George Washington) took the hill for Cotuit, having allowed one run in 3.1 innings this season over two appearances. Muhl worked as the closer at George Washington, tallying 11 saves last season for the Colonials.

The Kettleers struck first in the top of the first inning, as Cal Stevenson (Arizona) hit an infield single to Y-D second baseman Paul Rufo (Binghamton) and advanced to second on a throwing error. After a ground out moved Stevenson to third, Hagen Owenby (East Tennessee State) hit a ground ball to shortstop and Kevin Smith?s throw from the edge of the infield grass pulled Brandon Skidmore off of the bag, scoring Stevenson.

Y-D responded, however, in the bottom of the first. Back-to-back singles started the inning, and Matt Whatley drew a walk to load the bases. Skidmore hit a hard ground ball back up the middle, scoring Smith (Maryland) and tying the game at one.

The game would remain 1-1 for the next five innings. The Red Sox had base runners in each inning, but timely double plays allowed Muhl to escape unscathed. But, in the bottom of the sixth, Skidmore smashed a 3-2 pitch from reliever Colton Hock (Stanford) over the center field fence for a solo home run and the Red Sox retook the lead, 2-1.

After Kuchta relieved Gaddis, Josh Shaw (St. John?s) led off the top of the eighth with a double down the left field line. The Kettleers later tied the game at two following a throwing error and a sacrifice fly.

The Red Sox threatened again in the bottom of the eighth, as Mikey Diekroeger (Stanford) and Nolan Brown (Texas Christian) led off the inning with singles. Corey Dempster (Southern California) moved them over with a sacrifice bunt, but the Red Sox were unable to push the go-ahead run across.

But, Whatley drew his third walk of the game with one out in the bottom of the ninth. Skidmore, who already had both RBI tonight for the Red Sox, came to the plate with two outs in the inning. Whatley advanced to second on a wild pitch by Rigby, and Skidmore capitalized with a line drive to center field, scoring Whatley and giving the Red Sox their second win of the season.

On the mound, Gaddis looked excellent all evening, lasting 7+ innings and allowing one unearned run on four hits. He also recorded six strikeouts, and continued to average nearly a strikeout per inning on the season.

Skidmore led the offense, driving in all three Y-D runs and going 3-for-5. Nolan Brown added three hits as well, and Rufo was excellent in the field at second base again. With 13 hits tonight, the Red Sox have now totaled 30 hits over their last two games.

The Red Sox will take on the Bourne Braves at home tomorrow, with the first pitch at 5 p.m.