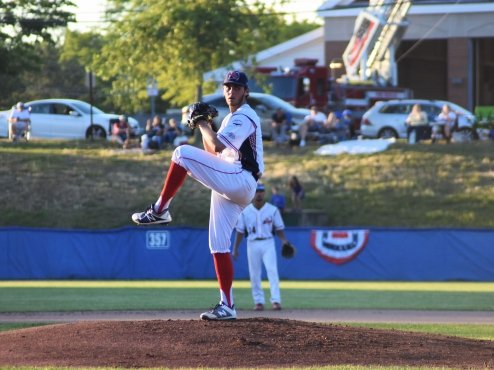 SOUTH YARMOUTH?The Yarmouth-Dennis Red Sox picked up their third straight win on Saturday night with a 6-2 victory over the Brewster Whitecaps. Y-D now leads the season series between the two teams with a 2-1-2 record.

Karl Kauffmann (Michigan) got the ball for the Red Sox and turned in his most dominant outing of the season, and perhaps of his entire tenure on the Cape. The Michigander cruised through 5.1 scoreless innings, allowing two hits, walking one, and striking out seven.

The Red Sox offense kept rolling, scoring seven runs on 17 hits in the contest. The 17 hits were one short of tying the team-high for the season.

Noah Campbell (South Carolina) got things started once again for Y-D and led off the second with his third home run of the season. Campbell finished the day 2-4 with a run and an RBI.

Y-D added runs in the third and fourth to make the score 3-0 at the halfway mark. Patrick Bailey (NC State) had a breakout day on offense, going 3-5 with a towering home run over the center field fence to bring home Christian Koss (UC Irvine) and extend the lead to 5-0 in the sixth.

The Sox tacked on another run later in that inning courtesy of a Jonny DeLuca (Oregon) RBI groundout.

Andrew Daschbach (Stanford) singled home a run in the eighth to make the score 7-2 and top off the offensive outburst from Y-D on the evening.

The Red Sox are now hitting .286 as a team on the season, more than ten points above the next-highest team.

Patrick Bailey?s mammoth HR in the sixth inning. Bailey entered play on Saturday without a hit to his name and left with a .375 batting average and two extra-base hits, including his homer in the sixth to make it a 5-0 game.

Y-D is back in action Sunday evening with a tilt against the Chatham Anglers at Veterans Field. First pitch is scheduled for 7 p.m.