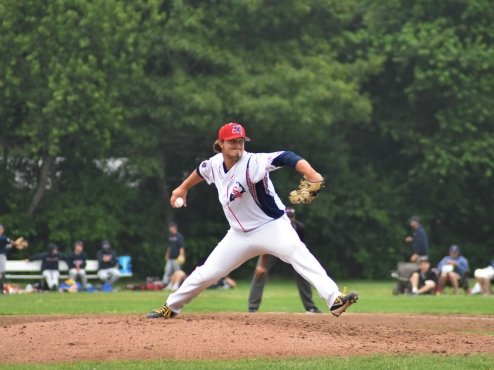 On June 30th against Cotuit, Andrew Daschbach (Stanford) stepped into the box as the leadoff man in the bottom of the fourth inning. He fouled off the first offering from Cotuit starter John Baker (Ball State) and then sent the second pitch of the at-bat over the fence for his third home run of the season. And while Daschbach was enjoying rounding the bases after extending the Y-D lead to 2-0, there?s a good chance that the bullpen was having an even better time.

If you had just listened and not looked after the home run, you likely would have guessed that a handful of Daschbach?s twenty-something friends from back home were hanging out in left field going wild for him after the home run. You would be right in that it was his friends. But those guys were no ordinary fans. Those guys were the 2018 Yarmouth-Dennis bullpen. And the 2018 Y-D bullpen was holding the bullpen bench high over their heads in celebration of their teammate?s home run.

?We had a couple of ideas for what we wanted to do,? says Sam Kessler, a right-hander from West Virginia University, about the bullpen?s plan for the celebration after Daschbach?s homer. ?We were thinking we were going to lift the bench, dogpile, or do something else. And we settled on the bench. Dash told me before the game ?I?m going to try to hit a home run for you guys so be ready? and we were, we went berserk. It was a fun time.?

Led by Kessler and Braidyn Fink (Oklahoma), the Y-D bullpen is certainly having the most fun of any on Cape Cod. Since arriving on the Cape, Kessler and Fink have been the main orchestrators of Y-D?s bullpen shenanigans.

?I think [Kessler and I] co-lead,? Fink said after the team?s 11-8 victory on Thursday, July 12th against Orleans, a matchup that was chock-full of bullpen shenanigans.

The pair also couldn?t pass up the opportunity to get in a friendly jab at their teammate, Nathan Wiles (Oklahoma).

?Wiles is a sidekick. [Fink and I are co-leaders]. Wiles,? Kessler said, motioning to the 6?5? righty, ?[is] assistant to the regional manager.?

Kessler then pointed to himself and Fink. ?Regional managers.?

?We?ve got good chemistry here,? Kessler said after his appearance in the July 12th contest.

Fink echoed Kessler?s sentiment: ?It took us, during the spring season, it took us a while to get to this kind of point,? he said. ?We did less shenanigans. But the guys down here are amazing; they just love to have fun with us. And Sam is another key part of that.?

The pair says that the bullpen shenanigans are meant to keep the mood light and the players engaged in the bullpen.

?You?re just trying to have fun honestly,? Fink says. ?Whenever we keep the loose mood we tend to play better. Most of the time we tend to pitch better?The bullpen is just about having fun.?

Sam Kessler says that it?s not only about having fun in the bullpen, but giving himself a way to stay engaged and focus on what is happening in the game so he can pitch to the best of his ability his next time out.

?Sometimes when the season?s going like this and you?re playing ten, twelve games in a row, it gets tough to stay mentally locked in,? Kessler explains. ?So it helps to have guys down there who keep you not distracted from the game but at least something to keep doing so you?re still paying attention to the game then when you go in you know what?s happening and you?re loose and hopefully you do well.?

Kessler?s hopes have come true; the relievers are not just enjoying themselves in the ?pen, they?re also shutting down opposing hitters. Trenton Denholm (UC Irvine), Ty Madrigal (St. Mary?s), and the aforementioned Kessler all have ERAs below 2.00 and are averaging more than a strikeout per inning. Denholm has yet to allow a run in his 11.2 innings of work.

The dominance does not stop after those three relievers, though. Chandler Fidel (Arkansas Little Rock), Ryne Nelson (Oregon) and Fink all have ERAs in the low-to-mid-threes and are averaging more than a strikeout per inning. The Y-D pitching staff is just three strikeouts behind the Chatham staff for most strikeouts on the season.

?We have each other?s backs,? Fink says of the bullpen?s mentality approaching the game. ?We?re just trying to keep pushing each other and make everybody else better around us.?

When they?re not on the mound, they?re enjoying themselves down the left field (or right field, depending on the ballpark) foul line.

And when the opportunity presents itself, like it did on July 12th when Andrew Daschbach hit another home run, the pitchers pounce on the opportunity to go nuts. They went with the bullpen-bench-over-the-head celebration once more. And Fink defended his decision to go with the same celebration a second time.

?We have to keep it original.?