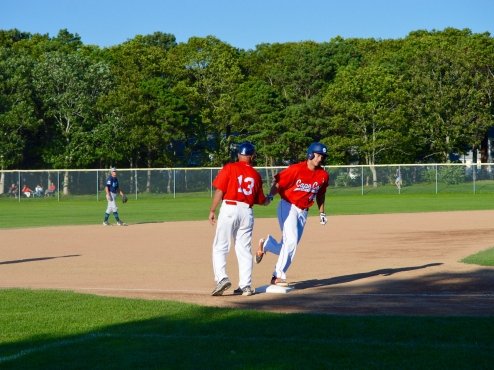 Series Notes: Y-D and Brewster will face off in the playoffs for the fourth time, and first since the Cape League moved to its current playoff format in 2010.

The Red Sox swept Brewster in the East Division Finals in 1989 and 2004, while also defeating the Whitecaps 2-1 in the 2006 Division Finals, all en route to Cape League Championships.

Both teams split the six-game regular season series in 2015.

How They Got Here: Y-D (22-22) clinched its playoff spot on the final day of the regular season following a Harwich loss to Brewster, which secured a position for the Red Sox.

Tied with Chatham for third place in the division, Y-D won the tiebreaker by virtue of having won the season series with the Anglers, 5-1.

The Whitecaps finished the campaign with a 24-19-1 mark, qualifying for second place in the East.

About the Brewster Whitecaps

Nick Senzel (Tennessee) finished the regular season leading the Whitecaps in several offensive categories. A Knoxville, Tenn. native, he had the highest batting average (.364) of all players on the team appearing in at least four games, while also standing at the top of the squad in terms of home runs (4) and RBI (33).

Brewster?s J.D. Busfield (Loyola Marymount) is a familiar face to the Red Sox, having started against Y-D twice during the regular season. He received a no decision in a June 19 win for the Whitecaps, while being dealt the loss in a 10-2 decision against Y-D on July 5.

Jamie Shevchik is in his first season as Whitecaps manager. Shevchik is also the head coach at Keystone (Pa.) College and recently wrapped up his 14th season directing the Giants program. Prior to Brewster, he led the Danbury Westerners of the NECBL to five playoff appearances between 2008 and 2014.

Gio?s Got Game: Second-year Cape Leaguer Gio Brusa (Pacific) has served as an offensive spark plug for the Y-D Red Sox since making his debut on June 22. In that timeframe, the rising senior has clubbed eight homers, tied for second in the league.

Brusa played for Brewster in 2014.

Thomas Steals Show on Bump: Ricky Thomas (Fresno State) earned the attention of many throughout the regular season, finishing as the league?s leader in wins (7).

Thomas? ERA was microscopic, sitting below 1 for the majority of his time with Y-D.

Welcome Back Walton: Along with Doug Willey (Arkansas) and Michael Donadio (St. John?s), Donnie Walton (Oklahoma State) was one of three players returning to Y-D for 2015.

Walton has been a defensive mainstay in the Red Sox infield, spending all of his time at shortstop.

The Stillwater, Okla. product has turned out a tremendous second summer with the Red Sox. In addition to earning All-Star recognition, Walton was named the CCBL?s Coca-Cola Player of the Week (June 22).

Bowden Lights out for Red Sox: Massachusetts native Ben Bowden (Vanderbilt) has been solid out of the Red Sox bullpen this summer, tossing 17.1 innings and not allowing a single run. He has scattered only five hits, striking out 31.

Bowden has closed twice, additionally earning a win at Chatham on July 30.

Bowden is not alone with respect to his New England roots. Coming from nearby points are Dustin Hunt (Andover, Mass.) and Doug Willey (Shelburne, N.H.).

Pick?s Playoff Push: At the helm of the Y-D Red Sox since 1997, this is Scott Pickler?s 12th playoff appearance with the Red Sox.

Around The Cape League: The winner of this series will face the winner of the (1) Orleans vs. (4) Chatham series in the East Division Finals.

In the West Division Semifinals, (1) Hyannis will face (4) Cotuit, while (2) Bourne will square off with (3) Wareham.