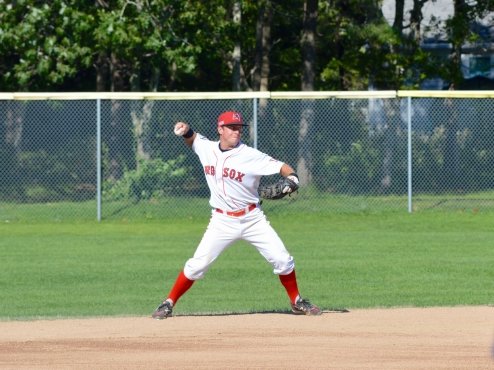 SOUTH YARMOUTH ? A loss has never felt so rewarding.

The defending Cape League champions will either travel to top-seeded Orleans (30-12-1 / 61 points) or second-seeded Brewster on Monday, August 3rd.

The Red Sox had little starting pitching to work with as manager Scott Pickler had to juggle setting up possible playoff pitching match-ups while also making sure they get into the playoffs. That meant handing the ball to newly-signed Yale pitcher, Mason Kukowski, who pitched two innings against Brewster on Friday.

Kukowski gave the team 3.2 solid innings, giving up two runs while striking out three before being greeted between the third baseline and the dugout by his teammates.

Outfielder Michael Donadio went 4-for-4 on the day with four singles while Cole Billingsley and Dallas Carroll both aided with multi-hit performances.

The trouble wasn?t getting on base, as the team notched 11 hits, but knocking those base runners in ? they stranded 12 runners, twice leaving the bases loaded.

Pickler counted on Alec Eisenberg, Danny Pobereyko and Chad Hockin to relieve Kukowski for 5.1 innings pitched after losing 11-0 to Cotuit (17-26 / 34 points) on Saturday ? again, juggling the aspect of winning for now versus planning for the future.

For now, the Red Sox only have to worry about the future as they have at least secured their stay on Cape Cod for two more days.

There?s no official word on the Game 1 starter for Monday, however Games 2 and 3 (if necessary) will give top starters Ricky Thomas and Brandon Bailey their normal five-days rest.

Be sure to stay with the Yarmouth-Dennis Red Sox team site through the next coming hours as more information about times, locations and pitching probables become more readily available.