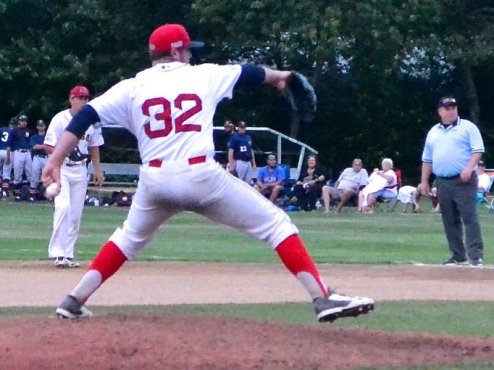 SOUTH YARMOUTH ? The Yarmouth-Dennis Red Sox may have backed into the 2015 playoffs, dropping their last two games by a combined score of 16-4. But if you?re thinking about how they reached the playoffs, you?re focusing on the wrong aspect of that sentence.

The Red Sox are in the playoffs and for manager Scott Pickler that?s all that matters.

?There?s no momentum that?s needed to be carried over from regular season ending to start of playoffs. Everyone has a clean slate. I feel one-thousand percent about that,? he said.

That?s good news for a Y-D team that has had its ups and downs in a 2015 season that saw Pickler?s team go an even .500 with 22 wins and 22 losses. A disappointing 4-6 through their last 10 games, Pickler credits the level of competitiveness, not only within the East Division but, of the league as a whole.

?You look at this league year-in and year-out, you?re going to win half the games and lose half the games because the competition is so good out here. All we can do is go out there and compete and see what happens.?

If there was any pressure surrounding the defending Cape League champions in returning to the playoffs amidst a log-jammed East Division, the Red Sox weren?t showing it ? especially closer Ben Bowden.

?Pressure is something you put on yourself. It?s not something that?s actually there unless you put it there. We don?t feel the pressure. We?re just on the field having fun. Everyone?s joking, everyone?s messing around. Nothing has changed for us.

?When we get into the playoffs I feel like we?re going to be a tough team to mess with. We?re very confident. We?re very relaxed about the whole situation,? Bowden said Friday.

A relaxed confidence throughout high-pressure situations is something Bowden knows all about. A Lynn, MA native, Bowden assumed the closer?s role his freshman year at Vanderbilt on the way to a College World Series title and relished the role in a return visit to Omaha as the runner-up in this year?s College World Series.

The 6-foot-4, 224 pound left-hander has thrived in the closer?s role for Y-D giving up no runs over 17.1 innings pitched while posting nearly a three-to-one strikeout to walk ratio (31:8) in 10 appearances.

The pressure was on in a July 30 divisional match-up against Chatham, who finished with an identical 22-22 record, as Bowden entered the game in the middle of the sixth inning after starter Brandon Bailey had just surrendered the first run of the game and trailed 1-0. Bowden inherited a runner on second base and recorded the next two outs by way of the K to stop the bleeding and get out of the jam.

He?d go on to finish out the game over the next three innings, not surrendering a hit while striking out seven. The Red Sox would go on to win the game 2-1.

Pickler said it was the best performance he?s seen from a relief pitcher in six years.

?What he did [that] night is the most impressive performance by a reliever since David Robertson came in the 2009 [Cape League] finals and struck out nine of nine guys,? he said.

Pickler cited a certain mentality that?s needed to be a dominant closer ? an unnerving sense of self-confidence and not being afraid of the moment ? something he believe?s Bowden possesses.

?When you meet a person you can tell. You can tell he?s got what it takes. It?s not about him ? until he gets on the mound. Then it?s about him. You don?t find a lot of guys like that.?

Everytime Bowden takes the mound the situation never changes. The numbers on the back of the hitter?s jerseys may change, but the situation always stays the same. It?s never a battle between himself and hitters. It?s always a battle against himself. As long as he does what he needs to, it doesn?t matter how big or small the situation is his approach remains the same.

?Basically my job is to get my teammates back in the dugout as fast as possible. I?m not trying to waste time by throwing balls. I have the confidence that I?m going to get everyone out I face.

I tell myself that no one is going to beat me, they?re not going to hit me,? Bowden said.

As the Red Sox set to defend their Cape League crown Monday in a three-game series against the second-seeded Brewster Whitecaps, Pickler?s team will look to Bowden, who knows a thing or two about defending a championship ? to relieve some pressure off his teammates.

Usually only used for an inning or two at most, Pickler has been stretching out Bowden perhaps in a move to shorten the game for his starting rotation ? a part of his team that he says lacks depth.

?We?re short on the starting pitching. We have three quality starters. [But] I like the back end of our bullpen. It takes the pressure off the starters. If they give me five or six innings, then we can see what the bullpen can do,? Pickler said.

The back-end includes Cal State Fullerton closer Chad Hockin, who?s served as the bridge-guy between the starters and Bowden this season.

Regardless if he enters the game in the sixth or the ninth ? with the bases juiced in a tie or in a bases-empty situation, Bowden will be waiting, ready to execute under the brightest of spotlights.

?Nothing?s changed for me [since playing in the College World Series]. I love having all eyes on me with the weight of the game on my shoulders to execute pitches.?