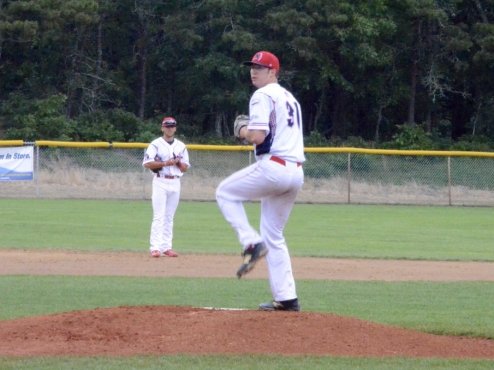 Uelmen picked up where he left off from his previous outing against Wareham on June 24, where he pitched five innings, with five strikeouts and no earned runs.

He was assertive from the start, retiring nine straight Mariner batters. He was on the bump for six innings, with four strikeouts and no earned runs.

The sixth inning showed how confident Uelmen was in his pitches. The bases were loaded with no outs and looked like a breakout inning for Harwich. He got Antoine Duplantis (Louisiana State) to pop out for the first out. Then challenged the dangerous Ernie Clement (Virginia), striking him out looking for out number two, and had Pavin Smith (Virginia) groundout to first, resulting in no damage done.

Deon Stafford (Saint Joseph?s) started it off for Y-D in the top half of the fifth after reaching second on a throwing error. After a sacrifice bunt by Will Toffey (Vanderbilt), Stafford stood on third with only one out. A wild pitch sent him home, giving Y-D a 1-0 lead.

In the sixth, Dillon Persinger (Cal State Fullerton) got the inning going with a double to the fence in left-center. A beautiful bunt by Tyler Houston (Butler) advanced Persinger to third with only one out. Persinger scored from a perfectly placed bunt by Kevin Smith (Maryland), putting them up by two runs. Williams ran into some trouble, walking Brendan Skidmore (Binghamton), JJ Schwartz (Florida) and hitting Stafford. Skidmore scored on a wild pitch, pushing the Red Sox up by three.

In the bottom half of the seventh frame, Harwich had their best chance to put two runs on the board. Joe Dundad (North Carolina St.) reached first after being hit by a pitch with only one out. On the fifth pitch of his at-bat, Johnny Adams (Boston College) hit a rocket to left field, which seemed as if it was going to clear the fence. However, Corey Dempster (USC) had other thoughts. He tracked the ball right off the bat, made a spectacular catch, and robbed Adams of a home run.

From this point forward, Y-D controlled the game.

The Red Sox face off against the Falmouth Commodores on Saturday at Fuller Field. First pitch is at 6 p.m.