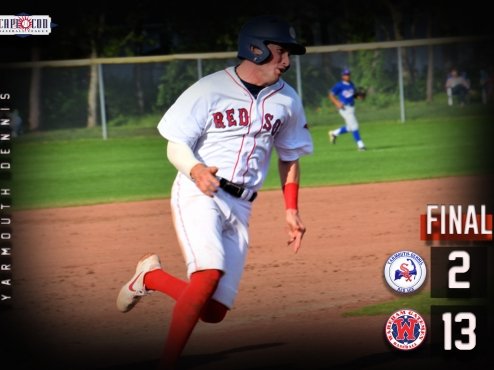 SOUTH YARMOUTH ? The Red Sox lost their second game in a row on Tuesday night as they fell to the Gatemen 13-2. Wareham had been struggling as of late, allowing double digit runs in each of their previous three games entering this one. It?s becoming more clear by the day that the Sox are having a tough time catching their breath, as they have now played in 12 straight games and don?t have a scheduled off day until the All-Star game on July 21st.

Jack Leftwich (Florida) was on the bump for Y-D and was looking to improve upon his 2-0 record. Right from the get-go it was obvious that he just didn?t have it tonight. The Gatemen put up a 3-spot in the first inning which included three extra base hits (two doubles, one triple).

They didn?t stop there, Matthew Rudick (San Diego State) ripped a solo home run in the second inning before the Gatemen added two more runs in the third. The 6 runs through three innings ended Leftwich?s night and the Red Sox were never able to dig themselves out of the hole. One positive take away is that it wasn?t as if Leftwich was all over the place, he only walked one batter. He threw strikes throughout his outing, it was just that the Gatemen were able to make solid contact and continuously drive in runs; something the Red Sox were unable to do all night long.

Wareham took a 7-0 lead into the home half of the seventh when Y-D seemed like they could make a little run before it got too late. Brad Beesley (Cal Poly) and Tate Samuelson (Cal Poly) both reached base with walks, while Noah Cardenas (UCLA) loaded the bases when he was hit by a pitch with one out. Erik Tolman (Arizona State) was hit by a pitch as well, scoring Beesley from third. Wyatt Young (Pepperdine) then grounded into a fielder?s choice and earned himself an RBI as Samuelson scored. Despite loading the bases with only one down in the inning, the Red Sox were only able to score twice.

That was when the Gatemen exploded for four runs in the eighth and two more in the ninth. The 13-2 lead was way too much for Y-D to overcome, and they saw themselves lose once again. Rudick was the star of the night, blasting his second big fly of the game in the ninth ? this time with a man on base. He ended the day with two home runs, three RBI, and three hits.

Just about the entire Y-D offense struggled at the plate tonight besides Beesley and Young. They had two hits apiece, accounting for the only four Red Sox hits in the entire game. Even in the seventh when the Red Sox scored their two runs, there was not one base hit in the inning. Young is now in second place in the CCBL with a .377 batting average, and tied for third in the league in hits (26) with his teammate Austin Wells (Arizona).

Fortunately for Y-D, Chatham lost tonight as well, so the Red Sox didn?t lose their spot in the standings. They remain two points off of first place, and will have a chance to improve their record tomorrow night.

The Red Sox will travel to Brewster for a 5:00 P.M. game at Stony Brook Field against the Whitecaps.