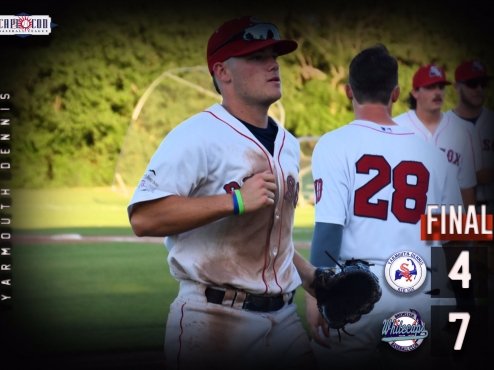 BREWSTER ? Despite outhitting the Brewster Whitecaps 11 to 10 and striking out just twice, the Yarmouth-Dennis Red Sox dropped their third straight game, 7-4. On a brighter note, Cleveland Indians starter Shane Bieber ? who played for Y-D in 2015 ? was named the All-Star Game MVP Tuesday night after striking out the side. Georgia Tech infielder Luke Waddell ? who played for the Red Sox last summer and temporarily this summer ? is tearing it up for the USA Baseball Collegiate National Team, batting .364 at the top of the lineup.

The top of the Y-D lineup was productive at the plate last night. Wyatt Young (Pepperdine) went 2-5 with a run to improve his batting average to .378, second-highest in the Cape League. Austin Wells (Arizona) went 3-3 with two runs, two doubles, a walk, and an RBI to bring his average up to .333. Noah Campbell (South Carolina) is now hitting .300 after going 3-4 with a triple and two RBIs.

Ryan Hare (UNLV) got the start for Y-D and pitched well. He struck out four batters and gave up three hits and one run in four innings. Cullen Kafka (Oregon) came in for 1.1 innings and struck out the first two batters he faced on six pitches. He gave up two hits and two runs. Oscar Carvajal (Fresno State) gave up two hits and one run in one inning. Y-D?s go-to closer Taylor Dollard (Cal Poly San Luis Obispo) hadn?t given up a single walk or run until last night, when he issued one walk and gave up three runs on four hits to be credited the loss.

The Whitecaps wasted no time getting on the board, capitalizing on a leadoff walk, a base hit, a double steal, and a sac fly in the bottom of the first inning. Riley King (Georgia) made an impressive forehand play at third base to limit the damage.

The Red Sox struck back in the top of the third inning, scoring two runs on three two-out hits. Young smacked a liner into center field for his second hit of the day, followed by a passed ball and a flyout by Brad Beesley (Cal Poly San Luis Obispo) that advanced Young to third for Wells. Wells roped an RBI double into the right-center gap, then scored from first on a bloop single down the right field line by King. Campbell tripled off the right-center wall to make it a 3-1 game.

Y-D got another run across in the top of the fifth inning, as Wells ripped another double to right-center and scored on a chopper over the third baseman?s head by Campbell.

The Brewster comeback began in the bottom of the sixth inning, when the Whitecaps scored two runs on two hits. An infield single and two walks juiced the bases for Gage Workman (ASU), who ripped a hard grounder to the left of Y-D second baseman Gavin Dugas. Dugas made an athletic diving stop and threw out the runner at second base. With two outs and runners on the corners, Christian Molfetta (Stanford) legged out a slow chopper to Young ? Young lost the ball on the transfer, but the play was ruled an infield single.

The bottom of the seventh inning was disastrous for the Red Sox, beginning with a misplayed ball in right field ? ruled a single with an error. Red Sox Manager Scott Pickler then turned to his best closer, Dollard. Dollard, who entered the game with a perfect 0.00 ERA in six appearances, had an uncharacteristic performance, giving up four straight hits, an intentional walk, and a HBP to make it a 7-4 game.

The game was called in the bottom of the eighth inning due to darkness. Because the 15-10-1 Chatham Anglers also lost last night, the 14-10-1 Red Sox remain two points behind the East Division?s best team. However, the red-hot Orleans Firebirds are now just one point behind Y-D. The Red Sox will get another crack at the Whitecaps tonight at Red Wilson Field. First pitch is set for 5 p.m.

On Tuesday night in front of an electric Cleveland crowd and millions of others on TV, Cleveland Indians starter Shane Bieber became just the second pitcher all-time to strike out the side in his home park in his first All-Star Game. Bieber was a walk-on at UC Santa Barbara, didn?t make his MLB debut until 13 months ago, and only made the All-Star Game roster as a replacement for Mike Minor of the Texas Rangers. His performance earned him the All-Star Game MVP trophy ? and a new ride.

Bieber made three starts for Pickler in 2015, boasting a 1.92 ERA with 14 strikeouts and just two walks in 18.2 innings. Matt Blake, his pitching coach while on the Cape, is now the Indians? assistant director of player development. On Wednesday, Blake tweeted, ?Hard to appreciate how far Biebs has come since having him w/ @YD_RedSox in ?15. Watching him ascend through our @Indians org & become an actor for our staff in ?19 is something, but showing out in front of the hometown crowd last night was pretty special!?

According to an article by The Athletic?s Zack Meisel, Bieber threw around 88-91 mph while on the Cape, and one of his biggest strengths was his fastball command. However, Meisel said the thing that impressed Blake the most was Bieber?s eagerness to learn and willingness to be coached ? qualities that Pickler looks for in players every year when recruiting.

Luke Waddell a Top Producer for Team USA: After playing for the Red Sox all of last summer and for a few weeks this summer, Waddell traveled to Cary, NC, to try out for the USA Baseball Collegiate National Team at the end of last month. After making the roster, Waddell earned a starting spot in the infield and is hitting at the top of the lineup. He is currently batting .364 for the 4-2 United States team.