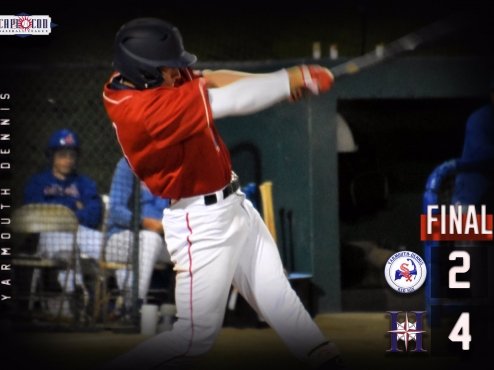 Pitching has been the Red Sox?s Achilles heel all summer. While Y-D boasts the second-best offensive statistics in the Cape League with a .263 batting average and 191 hits, they have the third-worst ERA at 4.11. Beller ? likely a future All-Star ? didn?t necessarily throw poorly, but he didn?t look his best either. He struck out five batters but walked one and hit one in addition to the five hits he gave up. Adam Jennette (Mercyhurst) walked three batters, struck out three, and gave up two hits and one run in two innings of work. Brady Corrigan (ASU) gave up just one hit in two innings pitched, and Jacob Winger (High Point) gave up zero hits in one inning of work.

Red Sox Manager Scott Pickler had to have been relieved to get a solid performance at the plate out of Andrew Eyster (South Carolina Columbia). Eyster registered his first hit since June 30 in the bottom of the third inning. College teammate Noah Campbell sliced a liner into right to give the Red Sox a chance to take the lead, but Eyster was gunned down at the plate.

Harwich got on the board in the top of the fourth inning. Young made an outstanding effort to get the first out, coming all the way across second base and making a spin move to throw out the runner in a bang-bang play, but the Red Sox didn?t get the call. A walk and another base hit juiced the bases for the Mariners. Beller struck out the next batter but hit the following batter to bring in the first run of the game. A grounder up the middle made it a 3-0 ballgame.

Red Sox second baseman Gavin Dugas (LSU) was hit by a pitch in the bottom of the fifth inning, followed by an Eyster walk. With one down and two runners on, Riley Tirotta (Dayton) flew out to deep center to allow Dugas to tag up and reach third. Young singled into right field to cut the deficit to two runs.

The Mariners increased their lead in the top of the sixth inning, capitalizing on a walk and two hits. The Red Sox answered in the bottom half of the inning, as Young doubled down the first baseline and came around to score on a productive groundout by Campbell and a passed ball. However, the comeback attempt fell short, and the Red Sox are now two points behind the first-place Chatham Anglers again.

League Leaders: Young, who was leading the Cape League in batting average going into last night?s game, dropped down to third at .369. Falmouth Commodore Zach DeLoach (Texas A&M) is now the top hitter with a .375 batting average, and Hyannis Harbor Hawk Jared DeSantolo (Florida Atlantic) is right behind him with a .373 batting clip.

Wells is now tied with Tyler Hardman (Oklahoma) of the Brewster Whitecaps in the home run category. Both players have left the yard five times. After last night, Wells dropped from first in the league to third in RBIs at 19. Hunter Goodman (Memphis) of the Hyannis Harbor Hawks has 22 and Nick Gonzales (New Mexico State) of the Cotuit Kettleers has 20.

Ian Seymour had his best outing of the summer Sunday night against the Orleans Firebirds, striking out nine batters in five scoreless innings. Seymour has struck out 32 batters in 19.1 innings pitched ? a league-best. He averages 1.68 strikeouts per inning, and has a 3.26 ERA. After Sunday, it?s almost certain that Seymour will be named an All-Star.