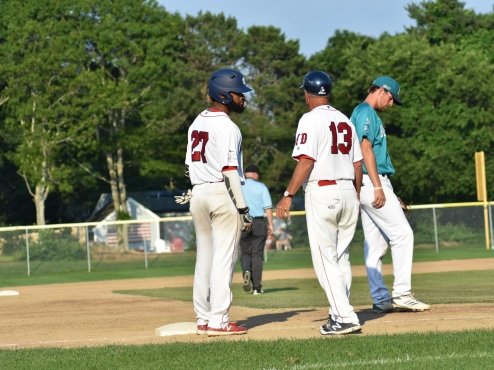 SOUTH YARMOUTH?It?s been a good decade for the Yarmouth-Dennis Red Sox. They clinched their 10th consecutive playoff berth (dating back to 2009) with their 8-2 win against Bourne on Thursday evening. By clinching, Y-D becomes the only team to make a postseason appearance each season since the playoffs expanded to eight teams in 2010 (though Orleans and Bourne have the opportunity to join them, should they each clinch a playoff berth).

Blair Henley (Texas) got the ball for Y-D in the rematch with Bourne and put forth a solid effort: 4.2 innings pitched, five hits, two earned runs, and two walks allowed, and seven strikeouts on the day. Despite leaving with the lead, Henley did not go deep enough into the game to earn a decision.

Instead, Chandler Fidel (Arkansas Little Rock) was the winning pitcher. Fidel allowed just one hit in his inning and a third of work and got all four outs via strikeout. Y-D pitching rung up Bourne hitters 15 times on the day.

Trenton Denholm (UC Irvine) and Tommy Henry (Michigan) threw the final three scoreless innings for the Red Sox. Denholm?s two scoreless innings of work put him squarely in first place in ERA among all hurlers with at least 15 innings pitched. Denholm, an All-Star selection, has yet to allow a run on the season.

On the other side of the ball, Brad Beesley (Cal Poly) continued his hot streak by picking up Y-D?s first hit of the evening, a one-out double in the first. After Andrew Daschbach (Stanford) singled to move him to third, he came home when Quin Cotton (Grand Canyon) reached via error. Cotton came around on a single by five-hitter Jonny DeLuca (Oregon) and after one, the Sox led it 2-0.

Beesley came around to score again in the third inning. He reached on a single and was brought home when Jonny DeLuca picked up his second RBI single of the evening.

Beesley?s second run was all the Sox would need on the evening, but they decided to add four more in the sixth for good measure. And of course, it was none other than Beesley who got things started in that inning with a leadoff triple. Cotton singled home Beesley then came around to score, along with DeLuca, on a Nick Quintana (Arizona) RBI single to make the score 6-2. Luke Waddell followed Quintana?s RBI single with an RBI single of his own to push the Y-D lead to five.

In the seventh, Zach Ashford got the inning started with a double of his own and came home on a Quin Cotton single for Y-D?s final run of the day. Tommy Henry shut the door for the Red Sox with a scoreless ninth.

The Red Sox hit .436 as a team against Bourne on Thursday further bolstering their league-high .283 batting average. The Sox offense also leads the league in on-base percentage, slugging percentage, strikeouts (fewest) and is second in steals,walks, and runs.

Thursday?s offensive effort was spearheaded by Brad Beesley who went 3-5 with three runs and was a home run shy of the cycle. Quin Cotton (3-5, 3 R, 2 RBI) and Luke Waddell (Georgia Tech) (3-4, 1 RBI) were the other Red Sox with three hits.

Nick Quintana?s two-out, two-RBI single in the sixth. The score sat at 4-2 in the sixth and Quintana came up with the bases loaded and a chance to break the game open. That he did. Quintana rifled a 1-2 offering into left-center to extend the lead to 6-2 and put the game away.

The Red Sox are back in action on Friday night against the Brewster Whitecaps. First pitch from Red Wilson Field is scheduled for 5 p.m.