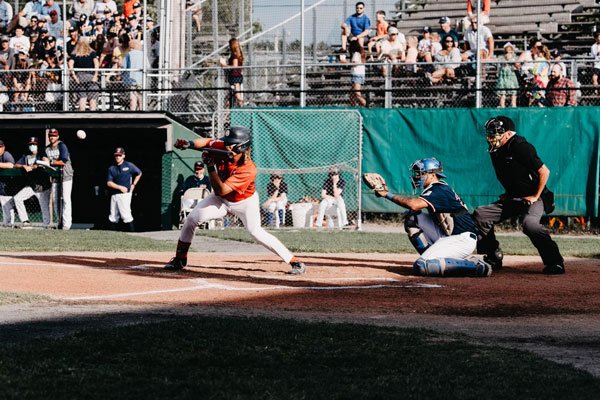 A late comeback attempt by the Yarmouth-Dennis Red Sox came up just short, as they fell to the Wareham Gatemen, 4-2, Tuesday night at Spillane Field.

The loss keeps Y-D’s magic number to clinch the East Division at four, after the second-place Brewster Whitecaps won earlier in the day. For the Gatemen, the win snapped a five-game losing streak and an 11-game winless streak.

Braden Montgomery supplied the offense for Y-D, with a two-run homer to right-center in the seventh inning. But the Red Sox failed to capitalize on multiple chances with runners in scoring position. Y-D went 1-for-7 with RISP and failed to produce an RBI hit outside of Montgomery’s homer.

The only Y-D hit with a runner in scoring position was a Jonny Long single in the second inning to load the bases with nobody out. But after a fielder’s choice and two strikeouts, the Sox failed to score in the inning.

“We had the big opportunity early and we didn’t come through there,” Y-D Field Manager Scott Pickler said. “You’ve got to take advantage of those situations.”

The offense didn’t look lethargic — the Red Sox hit the ball hard all night, and unfortunately a fair share of them didn’t fall their way.

“I thought we hit the ball as hard as we’ve hit it all year,” Pickler said. “We stung ten balls right at somebody and had 13 hits … We can’t be disappointed with the way we swung the bat. It’s baseball.”

Cole Carrigg went 3-for-4, Jonny Long and Zach Lew each had two hits, and Caden Connor extended his hitting streak to eight games with a second-inning single.

The Gatemen, on the other hand, made the most of their chances. Wareham produced four RBI singles, each coming with multiple men on base. Each of Will Rogers, Brian Morrell, Bryan Padilla, and Max Anderson delivered run-scoring hits. Three of those hits came with two outs in the inning.

On the mound, Drew Dowd pitched three solid innings to start for the Red Sox. Vaughn Mauterer made his first appearance of the season for the Red Sox in the seventh, striking out a batter in a scoreless frame.

The Red Sox will look for better luck at the plate Wednesday when they host the Orleans Firebirds at Red Wilson Field. First pitch is set for 4:30 p.m.

1 thought on “Red Sox fall just short over the bridge, lose 4-2 to Wareham”