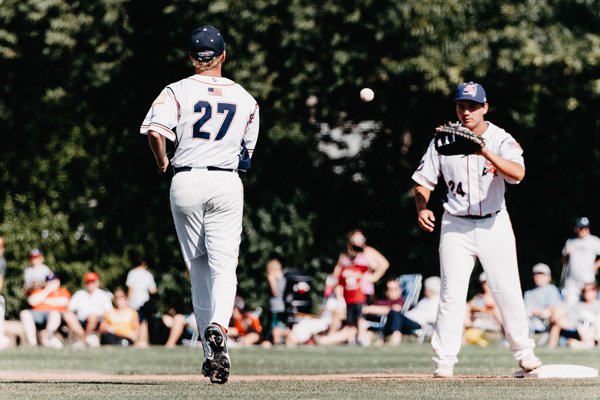 The Y-D Red Sox dropped their third straight on Wednesday, losing 9-1 to the Orleans Firebirds at Red Wilson Field.

With Bryce Robison and Bryce Warrecker taking the bump on Wednesday, fans were anticipating a low-scoring pitchers duel between two All-Star pitchers.

Through five innings, that’s exactly what took place. Both teams combined for just three hits, and at one point 15 straight hitters were set down, a streak only broken by an error.

Orleans finally broke the scoreless tie in the sixth inning, when Logan Beard and Luke Keaschall began the inning with singles. After J.D. Urso reached on a fielder’s choice to load the bases, Cam Jones singled to score both Beard and Keaschall.

That signaled the end of Robison’s day, one where the final linescore misrepresents how good of a day he had on the bump. He finished with 5+ innings, six hits, three earned runs, walking one and striking out three.

Aaron Calhoun came in out of the pen, and after allowing another run to score on a fielder’s choice, struck out the next two batters.

With Orleans threatening to add to a 3-0 lead in the seventh, Calhoun made a diving catch on a bunt attempt and then fired to third to double off the lead runner to end the frame and keep the Sox within three.

Warrecker ran into some trouble in the bottom of the seventh but was able to work out of it allowing just one run, keeping him in line for the win and giving Orleans a 3-1 lead through seven innings.

Any chance that Y-D had heading into the ninth was erased in the top half, as Orleans scored six runs. While a six-run inning is normally tough to sit through, what made it even worse is that the Firebirds got just one hit in the inning, instead being aided by four walks, a sacrifice fly and an error.

Treyjen Meza and Sam Brodersen made their Y-D debuts, and while the ninth inning quickly fell off the rails, Pickler noted that it was important to see them in regards to how the rotation and bullpen will look when the playoffs start next Thursday.

“It was good for me to get some guys in that I hadn’t seen,” Pickler said. “We’ll break some guy’s bubbles, get them in and things like that, that’s where we are at.

Pickler also noted the importance of getting home-field advantage in the postseason, something that they have not been able to clinch despite multiple opportunities over the last few days.

This is just the second time all season that the Red Sox have lost three in a row this season. The first three-game losing streak came all the way back in the first week of the season, one that dropped Y-D to 0-3-1.

Tomorrow is the final off day of the regular season. On Friday, the Sox will travel to Orleans on Friday for another matchup with the Firebirds at Eldredge Park.