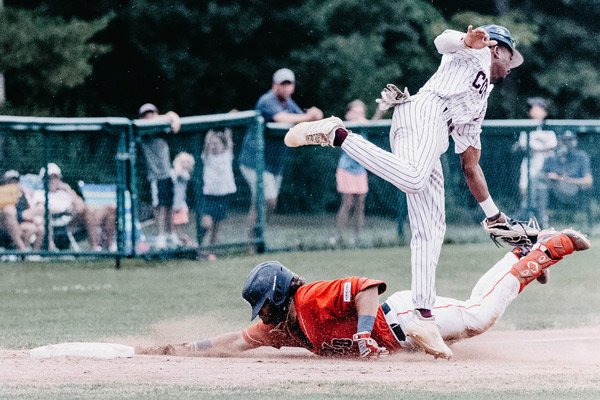 The Y-D Red Sox opened up their post-All-Star break schedule with a dud, committing five errors in a 12-4 loss in seven innings to the Cotuit Kettleers at Lowell Park on Monday. The eight-run loss matches Y-D’s worst loss of the season, an 11-3 loss to Wareham on July 2.

“We just didn’t play catch,” Y-D Field Manager Scott Pickler said after the game. The Sox committed five errors, matching a season-high, including three in a four-run fourth for the Kettleers.

Five of the 12 runs scored by Cotuit were unearned, including four of the six charged to starter Connor Markl. Markl gave up five hits in just 3.2 innings but certainly could have gotten out of the fourth if not for the three errors.

“He threw well, he didn’t get hit hard,” Pickler said. Pickler highlighted how Markl had gotten a groundball that should have been the final out, but the ball was thrown away and two runs scored to make it 6-3. It was Markl’s final batter before being pulled.

Amidst the defensive struggles, there was one gem early in the game. With the bases loaded and no one out, Cotuit was threatening to break open what was then a 1-1 tie. Trotter Harlan smoked a ball that looked destined for the left-center field gap, likely plating all three runners.

Instead, Homer Bush Jr., who started the play shifted over to the right-center gap, sprinted over, and made a diving catch for the first out of the inning. Tyler Johnson came in to score, but Caleb Ketchup grounded into a double play on the next at-bat, keeping the game at 2-1.

While they did put up four runs, it wasn’t much better on the offensive side. Caden Connor and Fernando Gonzalez each tripled, but Y-D only strung together three other hits, all singles, as the game quickly fell out of reach. Cotuit plated ten runs in the final four innings.

“We didn’t make great adjustments early in the game,” Pickler said. “Guys were swinging with their hands and not their bodies.”

The Red Sox return to action tomorrow at Spillane Field in Wareham against the Gatemen before returning home on Wednesday when they will face the Orleans Firebirds.