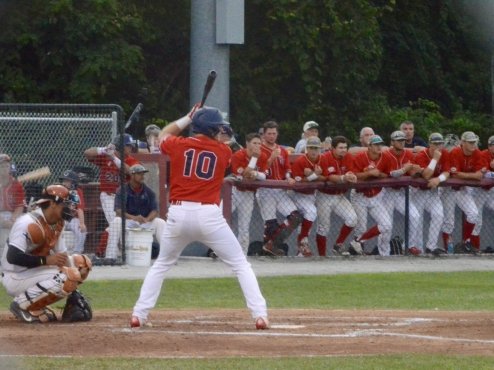 SOUTH YARMOUTH, Mass. ? Powered by three home runs and 14 hits, the Yarmouth-Dennis Red Sox avoided elimination and pushed the Cape Cod League Championship series to a third game by defeating the Falmouth Commodores by a score of 9-4 on Friday night.

The Red Sox took advantage of a strong wind blowing out to center field throughout the game, as their 14 hits on Friday were the most they have recorded in a playoff game this season.

Jared Janczak (Texas Christian) tossed five strong innings for the Red Sox, allowing just one earned run on six hits and picking up the win. Because so many of the balls he allows in play are ground balls, he was the perfect pitcher for Friday?s blustery game ? his ground balls were no threat to be carried out of the park, and it was simply business as usual for Janczak.

Kevin Smith (Maryland) tallied the Red Sox?s first hit of the game with two outs in the first, hitting a hard ground ball back up the middle. Will Toffey (Vanderbilt) and Deon Stafford Jr. (Saint Joseph?s) followed with back-to-back towering home runs, which were their second home runs of the season and gave Y-D a 3-0 lead.

The Commodores responded with a run in both the top of the second and third innings, pushing across runs on a bases-loaded infield hit by Cadyn Grenier (Oregon State) in the second and a wild pitch in the third, cutting the Red Sox lead to 3-2.

In the third inning, the Red Sox offense again heated up with two outs, as Stafford drew a walk and Brendan Skidmore (Binghamton) singled to right field. Matt Winaker (Stanford) then roped a double into the left-center gap, scoring both runners and pushing the Red Sox?s lead to 5-2.

After JJ Muno (California Santa Barbara) reached on a perfect drag bunt with one out in the fourth, Smith launched the team?s third home run of the game, extending the lead to 7-2.

Falmouth responded with home runs in the top of the seventh by JJ Matijevic (Arizona) and Tristan Gray (Rice), cutting their deficit to just three runs, but a wild pitch and a sacrifice fly by Skidmore in the bottom half of the inning pushed the Red Sox advantage back up to five.

Sam Delaplane (Eastern Carolina) pitched two scoreless innings of relief to end the game and nail down the 9-4 victory. Cole Sands (Florida State) took the loss in the contest for the Commodores.

This marks the second year in a row the Red Sox have staved off elimination in the second game of the league championship, as they defeated the Hyannis Harbor Hawks, 9-3, to force a third game in last year?s playoffs. Y-D won the title with a resounding 8-1 victory in Game 3.

The Red Sox look to repeat history as they travel back to Falmouth tomorrow for the final game of the season. First pitch is at 6 p.m.