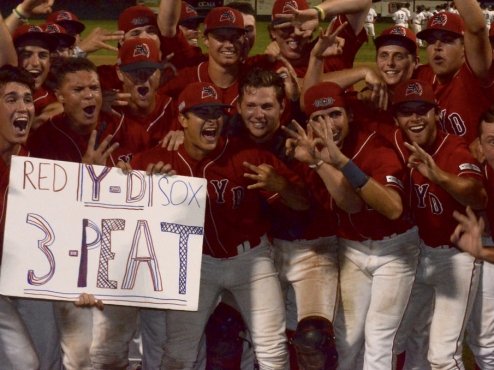 FALMOUTH, Mass. ?? It?s been 40 years since a team in the Cape Cod Baseball League has won a title more than two years in a row. The Yarmouth-Dennis Red Sox snapped that drought with the 3-0 win against the Falmouth Commodores to complete the three-peat.

The Red Sox couldn?t ask for anything more from the Western Carolina product Bryan Sammons (1-0). The 6?4 lefty blanked the dangerous Falmouth offense, gave up only two hits and fanned six in six innings of work. Sammons located his pitches incredibly well while keeping the Commodore batters off-balance all night.? Sammons picked up his first win of the summer playoffs.

Jake Bird (UCLA,0-1) got the start for Falmouth and was credited with the loss.rnrn? The Y-D offense wasted no time and pushed a run across the board in the first inning. With the early lead, the Red Sox seized the momentum and rode that wave for the rest of the ballgame.

Dillon Persinger (Cal State Fullerton) leadoff the game with a grounder chopped just inside the third baseline, to earn himself a double. JJ Muno (UC Santa Barbara) moved Persinger to third with a sacrifice bunt, and a Kevin Smith (Maryland) sacrifice fly propelled him home.

The Red Sox added some cushion with two runs in the second. Deon Stafford Jr. (Saint Joseph?s) drew a walk to spark the frame, and advanced to third on a double poked by Matt Winaker (Stanford). Stafford Jr. crossed the plate on a balk, and Winaker scored on a Nolan Brown (TCU) base knock.

Despite running out of steam, Sammons dug deep in the sixth. He gave up a single to start the inning and got a fly ball for the first out. The next at-bat he caused Tristan Gray (Rice) to roll over on the ball, resulting in a 4-6-3 double play. The inning was over just like that.

Will Montgomerie (Connecticut) relieved Sammons in the seventh and it seemed as if the large crowd in the big game gave him an edge. He cranked it by three straight Falmouth hitters to strikeout the side.

The eighth was the Commodores? biggest chance to make a comeback. They had two on with one out, but would end up being stranded. Calvin Faucher (UC Irvine) struck out back to back batters to get out of the jam. It was clear that Faucher had a little extra confidence to throw his breaking balls in the dirt because of Joey Thomas?s (Cincinnati) stellar blocking behind the dish.

Faucher shut the door in the ninth, receiving his fourth save of the postseason. After he had ended the game with a strikeout, the rest of the team came out to eagerly meet him in front of the mound, causing your typical championship win dogpile.