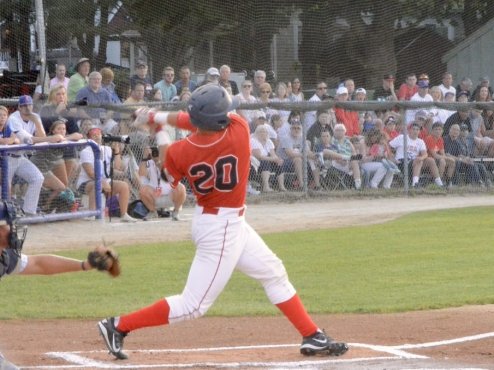 FALMOUTH, Mass. ? On the humid Thursday night, Yarmouth-Dennis hit a bump in the road on the trek to complete the three-peat. The Red Sox dropped a back and forth thriller to the Falmouth Commodores, 5-4 at Fuller Field.

The contest was an offensive battle through the early five, while the late four was fought with pitching and defensive.

Oliver Jaskie (Michigan, 1-1) got the start for Y-D and tossed for 4.1 innings, walked three and struck out five. Jaskie received his first loss of the playoffs.

Michael Baumann (Jacksonville) relieved Jaskie of his duties in the fifth inning and was quite impressive. He walked one and fanned six in 3.2 innings of work. Baumann worked his pitches well, keeping the Commodore batters off-balance.

Jeffrey Passantino (Lipscomb, 2-0) was on the bump for Falmouth and pitched 6.2 innings, walked one and whiffed eight. It was no surprise that Passantino would have such an impressive championship game, after the numbers, he posted during the regular season. Passantino was credited with his second win of the summer postseason.

The Red Sox offense came out firing, taking a 1-0 lead in the first. Dillon Persinger (Cal State Fullerton) recorded the first base knock of the ballgame with a liner into left, and Kevin Smith (Maryland) followed up with a double that was smoked off the center field wall. Persinger scored easily on a Will Toffey (Vanderbilt) sacrifice fly.

Falmouth quickly responded with a run of their own in the bottom half. Deacon Liput (Florida) sparked the inning for the Commodores with a one-out single and crossed the dish on a Joshua Watson (TCU) double ripped down the right field line.

Y-D?s one run deficit quickly changed into a two-run lead after a Deon Stafford Jr. (Saint Joseph?s) crack of the bat.

Toffey got the fourth frame going with a beautiful bunt for a single, and Brendan Skidmore (Binghamton) followed with a single stroked into left. Stafford Jr. then crushed a three-run blast over the center field wall, putting the Red Sox ahead.

The Red Sox lead deteriorated in the bottom half of the inning, as Falmouth tallied two runs. A Tyler Lawrence (Murray St.) solo home run, and Grenier?s ground rule double, leveled the showdown at four apiece.

A Tristan Gray (Rice) RBI single gave the Commodores the lead in the fifth. A great diving play made by Persinger that resulted in an inning-ending double play prevented Falmouth from a breakout inning.

Y-D was able to develop some quality chances to score in the eighth and ninth, however, were unable to capitalize.

The hard-throwing righty Corbin Martin (Texas A&M) shut the door for Falmouth and picked up his second save of the summer playoffs.

With the loss, Y-D trails 1-0 in the series and hope to tie it up at Red Wilson Field tomorrow. First pitch is at 4 p.m.