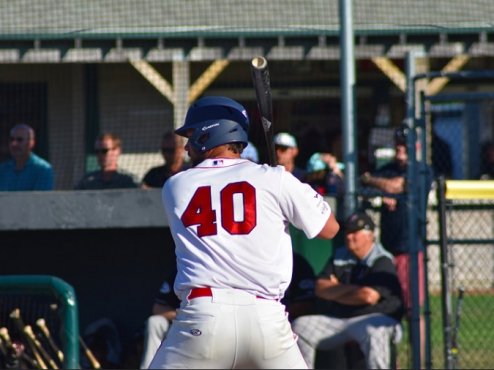 SOUTH YARMOUTH ? The Yarmouth-Dennis Red Sox fell to the Brewster Whitecaps 7-3 in the final regular season meeting between the two teams Friday.

Zach Linginfelter (Tennessee) made his second start against Y-D this season and was superb, no-hitting the Red Sox through the first five innings of the ball game. He walked three and struck out three in his five innings of work.

The Whitecaps scored all seven of their runs in the third and fourth innings off of Y-D starter Nathan Wiles (Oklahoma). While only five of the runs were earned, the Whitecaps picked up nine hits off Wiles in just 3.1 innings.

Hunter Bishop (Arizona State) got the scoring started with a two-RBI single to left field that scored Dominic Canzone (Ohio State) and Cameron Eden (California). Bishop and Jesse Franklin (Michigan) came home on another two-RBI double, this time off the bat of Ray Alejo (Central Florida).

Canzone added an RBI single in the fourth, and came home on Franklin?s two-run home run to center.

So You Think You Can Pitch?

With the Red Sox down by seven and a grueling stretch of baseball ahead, Coach Pickler sent Luke Waddell, a position player, out on the mound for the eighth. Eden led off the inning for Brewster with a single, but Waddell secured three fly outs to escape the inning unscathed.

It looked like Sam Kessler (West Virginia) was going to come on in the ninth but Zach Zubia (Texas), who?s normally a first baseman or designated hitter, entered the ballgame instead. He walked one in the inning, but induced three fly outs as well to keep the game right where he found it.

Neither player had ever pitched at any point in college, making their scoreless debuts all the more impressive.

?It was fun,? said Zubia. ?The team supports everyone out here. It?s fun to share a special moment like that.?

?I was just trying to keep it in the zone and throw strikes,? said Waddell after the game. ?It was a cool moment, but we?re ready to move on and play tomorrow.?

The Red Sox head up the road to Veterans Field to take on the Chatham Anglers on Saturday. First pitch is scheduled for 7:00 p.m.