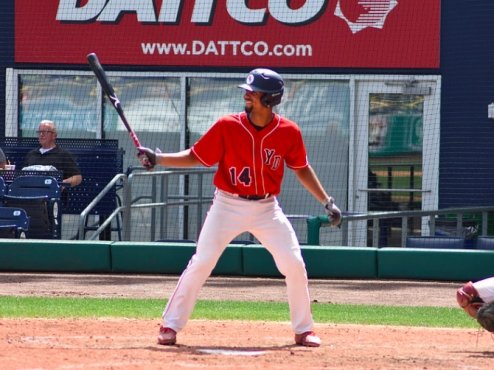 HARWICH ? The Yarmouth-Dennis Red Sox wrapped up the regular season crown in the East Division Saturday with a come from behind 8-5 victory over the Harwich Mariners.

The Red Sox stumbled out of the gate, as starter Karl Kauffmann (Michigan) was tagged for five runs (four earned) in three innings of work.

Mitchell Tyranski (Michigan State) came on in relief of Kauffmann and worked 2.1 brilliant innings, striking out three while allowing just two hits and a walk. The left-hander became the winning pitcher when the Y-D offense exploded for six runs in the sixth.

It all started with Andrew Daschbach (Stanford) being hit with a pitch for the second time on the evening. Zach Zubia (Texas) then drew a walk before Danny Poidomani induced a fly out to second from Quin Cotton (Grand Canyon).

The Red Sox needed a two-out rally to take advantage of the traffic on the base paths and that?s exactly what they received, first in the form of an RBI single off the bat of Nick Quintana (Arizona). Christian Koss (UC Irvine) then singled to load the bases for Vito Friscia (Hofstra) who pinch-hit for Matt Dyer (Arizona).

Friscia worked a walk to bring home the second run of the inning, but the Red Sox weren?t done yet. Noah Campbell (South Carolina) came on as a pinch-hitter for Luke Waddell (Georgia Tech) and made his presence known immediately.

Campbell saw a first-pitch fastball from new Mariner pitcher Matt Cronin and sent promptly sent it over the wall in right for Y-D?s first grand-slam of the season.

?I just wanted to be aggressive,? said Campbell after the game. ?I felt like I would get a fastball and I got one I could hit.?

Trent Denholm (UC Irvine) allowed five hits and walked two but kept Harwich off the board in his 2.1 innings of relief. He ran into some trouble in the eighth, loading the bases for Ben Norman (Iowa) but Ryne Nelson (Oregon), the Y-D closer, entered for the four-out save. Nelson struck out Norman on five pitches to end the inning.

Quin Cotton and Nick Quintana each added RBI?s in the ninth to provide Nelson with some insurance, but the right-hander didn?t need it, striking out two of the three batters he faced in the ninth to end things.

No Pick, No Problem

Red Sox manager Scott Pickler was absent from the dugout Saturday for good reason: He and his wife drove down to Cooperstown for the 2018 Hall of Fame induction ceremony taking place on Sunday. One of Pickler?s former players, closer Trevor Hoffman, will be one of six new members inducted into the Hall Sunday. Pickler coached Hoffman at Cypress College and will be there to see his former player etched in history as a member of the prestigious Hall of Fame.

?It was great,? said Mercado. ?We all did our part. All of the coaches had input on everything and the players did their job. I?ve learned so much from Pick over the years. He?s the best, so all the credit goes to him.?