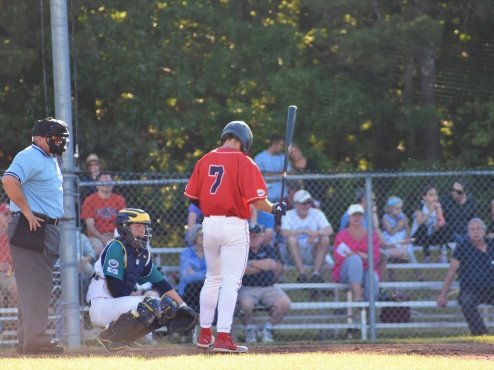 SOUTH YARMOUTH?The Yarmouth-Dennis Red Sox continued their hot streak on Sunday with an absolute thrashing of the Harwich Mariners, 8-1.

The Sox offense got things started early, as per usual, with a two-run first. Jonny DeLuca (Oregon), who made his first start at second base during his collegiate career on Sunday night, drew a one-out walk off Harwich starter Jacob Bradley (West Virginia State) before Noah Campbell (South Carolina) blasted his second homer in as many games, a no-doubter to right field to make the score 2-0.

Campbell got the start at short, his first appearance there of the season, and played an error-free ballgame.

In the second inning Y-D kept pouring it on. Vito Friscia (Hofstra), who just returned to the team earlier this week after a brief hiatus, led off with a single before being doubled home by starting catcher Matt Dyer (Arizona). Zach Ashford (Fresno State) followed with an RBI double of his own, and after Noah Campbell doubled two batters later to drive home Ashford, the Y-D lead was at 5-0 just five outs into the game.

In the fourth, DeLuca brought Ashford home with an RBI groundout. The Sox added another in the sixth on a Zach Zubia (Texas) homer, his second in four games.

Ashford came through again in the seventh with a two-out, RBI single, his fourth hit of the game. Ashford?s 4-5 performance raised his season average up to .318.

?Our team was ready to go,? Ashford said after the win. ?Everyone was hitting the ball. We had fifteen hits?just great team at-bats.

?And Wiles, he kept us in the game and was pitching a great game too, so gotta give him credit.?

Nathan Wiles (Oklahoma), had his best outing of the season in Sunday?s tilt against Harwich, giving interim manager Roberto Mercado five innings of one-run ball. Red Sox manager Scott Pickler was in Cooperstown for the 2018 Hall of Fame induction ceremony, but is expected back for Tuesday?s tilt at Eldredge Park. Wiles allowed just three hits, struck out two, and did not issue any free passes in the contest.

Y-D batters racked up 15 hits in Sunday?s contest, good for a .395 team batting average on the day. In addition to Zach Ashford?s aforementioned 4-5 with three doubles, a run, and three RBI, Noah Campbell went 3-4 with eight total bases (a HR and two doubles), a run, and three RBI. Vito Friscia and Matt Dyer also registered multi-hit games, with the latter going 3-4 with two runs and an RBI.

Campbell is now hitting .406, tops in the league, and his 6 HR are tied for third on the Cape. His 26 RBI are tied for fourth in the league and his seven stolen bases are second only to Blake Sabol?s 12 among hitters with at least five homers.

Noah Campbell?s two-run jack in the first. After a grand slam in yesterday?s contest, Campbell set the tone by sending one deep over the right field wall to open the scoring and give Y-D all the runs they would need to dispatch Harwich on Sunday.

The Red Sox are off on Monday. They return to action on Tuesday, July 31st, against Orleans. First pitch at Eldredge Park is scheduled for 7 p.m.