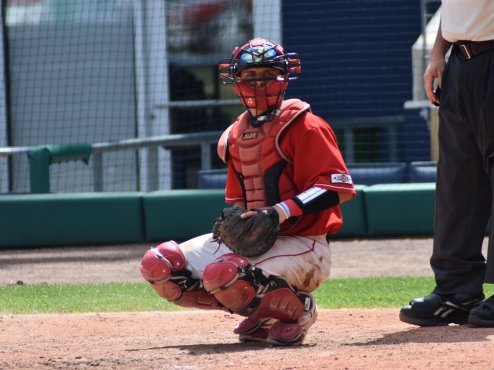 SOUTH YARMOUTH?The Yarmouth-Dennis Red Sox inched closer to clinching the East Division with a 4-4 tie against the Chatham Anglers at Red Wilson Field.

The Red Sox called in the reinforcements to do the heavy lifting on the mound Friday night. Brady Batten (Houston Baptist) started on the mound for Y-D in his first appearance of the year. The right-hander kept the Anglers off the board until the fifth inning, when he allowed a monster solo shot to Chatham designated hitter (and 2017 Y-D Red Sox) Drew Mendoza (Florida State). He threw two balls to the next batter before getting the hook from manager Scott Pickler. Batten?s final line: 4.1 innings, one earned run on two hits, five walks, and two.

Michael James (Hofstra) was the next man out of the bullpen for Y-D. He was able to get the job done, surrendering just one unearned run in his 1.1 innings of work. Relieving him was another newcomer, Gordon Ingebritson (Pasadena CC), who threw 1.2 innings and allowed two unearned runs.

The Red Sox bats were relatively quiet until the bottom of the seventh inning. Prior to the seventh, Y-D had accumulated just six hits and left all of their baserunners on base. In the seventh, though, the Sox batted around and got four runs on four hits, capped off by Andrew Dashbach?s (Stanford) two-RBI double with two outs.

?I liked my first two at-bats and then just got beat in that third, but I liked where my swing was at and felt comfortable,? Daschbach said after the game about his approach during his at-bat in the seventh inning. ?That first pitcher was pretty good today?he was throwing mid nines so that?s never a fun right-on-right at bat?but I was able to stick with it mentally and finish strong.?

Ingebritson got one out in the eighth before turning it over to Braidyn Fink (Oklahoma), who retired the only two batters he faced to keep the score even at four. It would stay tied until the game was called after eight innings for darkness.

Adam Kerner (San Diego) showed off his arm on Friday night, throwing out all three runners that attempted to steal on him, as well as picking off a Chatham runner at third base.

?Me and Jaffe, our catching coach, we?ve been working a lot on little tweaks to my transfer, my throwing mechanics, and it?s starting to pay off,? Kerner said. ?I feel a little bit quicker, a little more accurate and our pitcher, he gave me a really good chance every time. He was quick to the plate so that?s where it starts; if he?s quick to the plate then I can be better.?

Kerner is the first Y-D catcher to throw out three potential base stealers in a game this season, and he added a pickoff to boot.

?It?s weird,? Kerner said about the Chatham?s decision to keep running after he threw them out twice, ?After the first guy I thought ?Okay, they could still steal.? And after they stole again and I threw him out, I was like ?I don?t think they?ll go anymore.? Then the next guy went and I was like ?Okay?? so I just did it again.?

Kerner?s defensive excellence prevented three runners from advancing into scoring position and were a key difference-maker in the Friday night tie.

Andrew Daschbach?s two-out, two-RBI double to tie the game at four in the bottom of the seventh. After going 0-3 in his first three plate appearances of the night, Andrew ?Smashbach? Daschbach came through in the clutch, knocking an opposite-field double to plate Brad Beesley (Cal Poly) and Vito Friscia (Hofstra).

The Sox are back in action on Saturday night with a tilt against Harwich. First pitch at Whitehouse Field is scheduled for 6:30 p.m.